AMERICA - Saint Toribio de Mogrovejom, the great evangelizer who anticipated the journey of the "Church which goes forth" 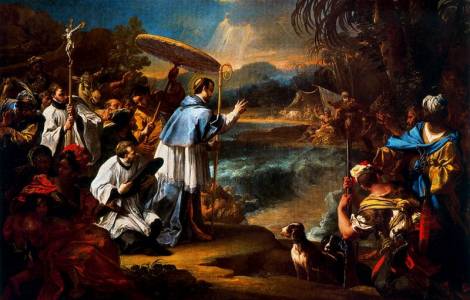 2022-06-06
Consecrated Life must be the sower, cultivator and harvester of a new way of being Church

Bogotà (Agenzia Fides) - "Saint Toribio anticipated the journey of the 'Church which goes forth' on our continent. He spent a total of 17 of his 25 years as Archbishop of Lima traveling some 40,000 kilometers making pastoral visits to the vast territories at a time when the geographical and existential outskirts were even more difficult to reach than in our days. This effort highlights the evangelization of indigenous people and the defense of their rights", said the President of the Peruvian Bishops' Conference and President of the Council of Latin American Bishops' Conferences (CELAM), Archbishop Miguel Cabrejos Vidarte of Trujillo, in a message to all the bishops of the continent on the occasion of the feast of St. Toribio de Mogrovejo yesterday, April 27, which he described on this occasion as "witness of a synodal Church which goes forth".
On the day of the Patron Saint of Latin American Bishops, "I address each and every one of you to greet you all with the same fraternal and ecclesial spirit that marked the life of this saint, a great evangelizer of our countries," Archbishop Cabrejos said inviting "to fix our eyes and hearts on the testimony of this pastor" who was passionate about the evangelization of culture. "Saint Toribio believed in the liberating power of the Gospel, capable of transforming hearts and social structures, so he dedicated his life to proclaiming the Gospel".
At this time, when the universal Church is preparing for the Synod of Bishops on synodality, Latin America and the Caribbean "feel the power of the testimony of a bishop who, in his time (16th century), fully implemented this synodal task. Saint Toribio de Mogrovejo lived this 'common journey', the ecclesiology of communion and sharing, in the everyday life of his ministry, not limiting himself to fine words or abstract theory", said Archbishop Cabrejos, who assured the prayer for all his brother bishops and asked the Lord, through the intercession of St. Toribio, "to bless the generous service that each of you renders for the good of the holy People of God".
Saint Toribio de Mogrovejo (Mayorga, November 16, 1538 - Zaña, March 23, 1606) was the second Archbishop of Lima, considered the "protector of the natives" and great organizer of the Church in South America, he was proclaimed Blessed by Pope Innocent XI on July 2, 1679, canonized by Benedict XIII on December 10, 1726, and declared Patron Saint of Latin American Bishops by St. John Paul II on March 9, 1983. (SL) (Agenzia Fides, 28/4/2022)