EUROPE/ITALY - A march to stop the war and its escalation: take the word out of arms and give it back to politics 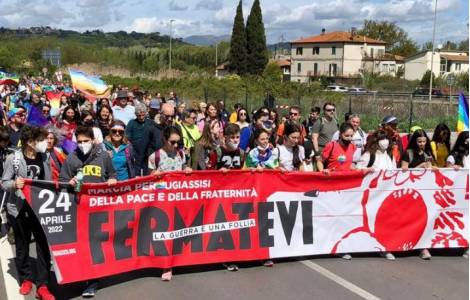 2022-06-03
150th anniversary of the founding: Comoni Missionary Sisters and the Daughters of Mary Help of Christians celebrate together

Rome (Agenzia Fides) - "I greet and thank the participants in the extraordinary Perugia-Assisi March for peace and fraternity, which is taking place today; as well as those who have joined, giving life to similar events in other cities of Italy". This is the greeting that Pope Francis addressed yesterday, during the recitation of the Regina Coeli in St. Peter's Square, to the tens of thousands of participants in the extraordinary Perugia-Assisi March which on Sunday, April 24, made the voice of the people of peace heard. The demonstration left Perugia in the morning and arrived at the Basilica of Santa Maria degli Angeli, at the foot of Assisi, around one o'clock, with a long and colorful procession: young and very young, families with children, elderly pacifist militants, disabled people in wheelchairs, boy scouts, students from many Italian schools. Then, the final stretch - a long climb - up to the square dominated by the Sacred Convent of St. Francis, where - obviously due to space issues - not everyone was able to attend the conclusion of the demonstration in the early afternoon.
Explaining what a march for peace can do, the coordinator of Perugia-Assisi, Flavio Lotti, told Fides: "To stop the war and its escalation, to push governments on the path of peace, a large movement of citizens for peace must grow from below. In every city, in every neighborhood, in every school, in every workplace, a group, a committee, an initiative for peace must be born. This march must be the beginning of a daily commitment that must see us all responsible". "Let us make our own - he adds - the appeal of Pope Francis, on Easter day: let us all commit ourselves to cry out for peace, from the balconies and in the streets. Peace! May those responsible for the nations listen to the cry of peace of the people".
Lotti also told those present: "This march is a courageous act of solidarity, peace and responsibility. The world is at war and no one can remain indifferent We are here to say out loud: stop before it is really too late. We are with Pope Francis, the only universal reference that tries to distance humanity from the third world war and the atomic apocalypse". "After 8 years of war and 60 days of escalation, the time has come to stop the war. This war could and should have been avoided. We have filled Ukraine with weapons, but it has not served to protect Ukrainians from the scourge of war. It is political suicide. It is not true that weapons are the only help we can give Ukraine. There is another way and that is why we are here. To save the lives of Ukrainians, we have to take the word out of arms and give it back to politics".
According to Lotti, it is urgent to promote "a new policy, a policy of care, peace and non-violence based on international human rights law, on disarmament and on the awareness that a now globalized world requires moving from unbridled competition to mutual care, from the economy of war to the economy of brotherhood, from armed security to common security. Politics must once again be the alternative to war".
156 Municipalities, Provinces and Regions, more than 50 schools, 88 national associations and 359 local associations joined the March, without counting individual supporters, which reached ten thousand in just four weeks. The demonstration gathered under the slogan "War is madness". (EG/PA) (Agenzia Fides, 25/4/2022)