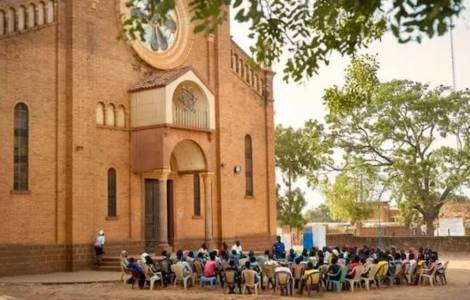 2022-10-07
Vocation is a mystery: sharing the Word of God with those who have never heard it

Yambio (Agenzia Fides) - "In recent months we have feared a return to war in South Sudan, especially when Vice-President Machar suspended his participation in the negotiations on responsibilities for the implementation of security programs. With the recent signing of an agreement, hope is restored and fears diminish. Of course, many doubt the resilience of the new agreement and the ability of the political leadership to keep their promises, but we want to trust the words and promises and continue to have hope that the war will be a bad memory". With these words Father Morris Ibiko, director of the Campus of the Catholic University of South Sudan in Yambio, in the diocese of Tombura-Yambio, comments on the agreement reached on April 3 between the President of South Sudan Salva Kiir and his deputy Riek Machar. The agreement provides for the unification of the command of the security forces, seen by many as a crucial, if not definitive, step in securing the fragile peace process. According to this, senior positions in the army, police and national security forces will be owned 60% by the President's faction and 40% by the Vice-President's alliance.
I believe that the announcement of the Pope's visit to South Sudan a few weeks ago played an important role in bringing the parties together and returning to negotiations to reach an agreement.
The highly symbolic gesture of the Pope who kissed the feet of these two leaders at Easter exactly three years ago in the Vatican and the appeal that followed, also left an indelible impression on the political leadership of our country. I am sure that the leaders of the factions said they could not welcome the Pope in July in a country at war: What would we tell him, how would we answer his questions? These, in my opinion, were the right concerns that, in some way , helped them come to an agreement. In Rome they affirmed that they recognize a father in the Pope, the President, then, professing himself a Catholic, felt that they could not disappoint him. We believe that the "Francis factor" has made a crucial contribution here. The appeal of church leaders to their consciences to be consistent and to think of the suffering of the people has also played an important role: the voice and prayers of the churches are bearing fruit and this gives us hope".
The already critical situation has been exacerbated by the floods that have devastated some areas of the country on an unprecedented scale in recent months. The exhausted population is waiting for political answers, that do not arrive also due to instability. "Floods and disasters have brought South Sudan to its knees. They happen every year, but the severity is obviously increasing due to the dramatic situation of the population also affected by the war. In other words, the effects are getting worse. There have been donations from the Pope and from international organizations, but I believe there is an urgent need to find a political solution that will address the problem and minimize it. This can only happen when there is stable and peaceful government and when the war finally stops and there is room for policy. Without stability, it is difficult to plan. We lament the lack of institutions that should deal with these problems at the national level".
At the beginning of July the Pope will be in Juba. The population is preparing to welcome him with many expectations: "There is a great expectation - said Father Ibiko - people are hoping that the Pope will bring peace to South Sudan and open a new era. Francis loves our country very much, the South Sudanese say: we have little power, what can we do? Only cry out to God. However, the Pope's visit is a wish of the faithful that is being fulfilled. He has wanted to come for a long time, but his trip has been repeatedly postponed for security reasons. It is very significant, in my opinion, that he finally decided to come and stop postponing despite the fact that safety is not yet 100% guaranteed and the situation is not yet stable. This fills the minds and lips with admiration and is like an embodiment in people's real problems. It will increase faith in God and in the incarnation of Christ who comes into the reality of the people as they are, with their problems". (LA) (Agenzia Fides, 25/4/2022)