ASIA/IRAQ - Chaldean Patriarch Sako: may the light of Christ's Easter illuminate the darkness of these times of war 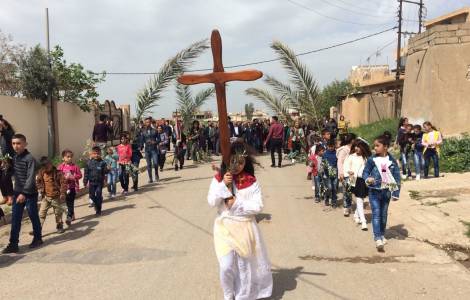 Baghdad (Agenzia Fides) - During Easter, which this year partly coincides with Ramadan (the month of fasting and prayer in the Islamic calendar), "every believer in God, and in particular Christians, must reject the deadly logic of war". This is what Cardinal Louis Raphael Sako, Patriarch of the Chaldean Church points out in the message spread for the upcoming Christian solemnity and invites us to look at the resurrection of Christ as the only light that can illuminate the darkness of the present time, marked by the omens of "a devastating world war". Referring explicitly to the wars that tear the world apart, the Chaldean Patriarch invites "all believers, Christians and Muslims, as they are currently fasting Ramadan, and Jews as well to look at the tragedy in Ukraine and Middle East Countries, their humiliation, and the harsh dismantling of its beautiful mosaic". Today more than ever - the Iraqi Cardinal points out - Easter celebration this year reminds us, more than any other time, of "God’s love for mankind, His closeness and His vast mercy to all through the resurrection of Christ, which is an affirmation for brighter future and salvation of humanity, as it proceeds according to His teaching".
The resurrection of Christ comes "to enlighten those sitting in darkness and in the shadow of death, in order to lead them to the path of peace", recalls the Iraqi Cardinal, repeating the words of the Gospel Canticle of Zechariah, father of John the Baptist. Resurrection is an invitation to enter into a new era, and a new covenant, in which we love each other sincerely, and cooperate enthusiastically with impartiality, to be always present next to each other, same as Jesus’ disciples, "who were united when He was risen with love and shared what they owned freely"
In his Easter reflection, the Chaldean Patriarch wonders why the Christian spiritual values disappeared in most of our societies. "What have we done with the teaching of Christ, who called us to love everyone, including our enemies?"
The Church - continues Cardinal Sako - should reflect the light of the Gospel on the current affairs that shape the life of our societies. Otherwise, it will remain “idle”.
Presidents, religious authorities and social communities - adds the Patriarch referring to the bloody conflict in the heart of Europe - "should work to end the wars between Russia and Ukraine, to resolve Problems through diplomatic means rather than fighting. Enough wars, casualties, grief, destruction, migration, poverty and diseases. There should be an end for the production of lethal weapons here and there", and "every honest person must reject this hell".
Also addressing a thought to the political-institutional paralysis created in Iraq after the October elections, Patriarch Sako hopes that the political forces will assume their responsibilities in the face of the destiny of the nation, and adopt "the language of dialogue and mutual understanding, which it is the only way to get out of the troubling political blockage in order to form a national government" capable of urgently and wisely implementing the necessary reforms to safeguard the country's economic stability and social cohesion. (GV) (Agenzia Fides, 13/4/2022)

EUROPE/UKRAINE - Representatives of the US Pontifical Mission Societies visit the country: "We want to share suffering and pain"