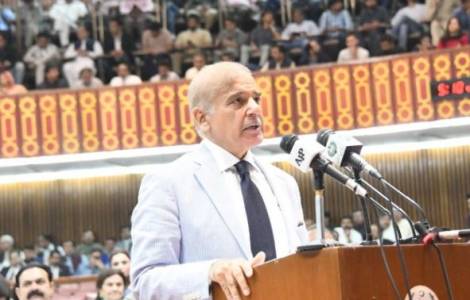 Lahore (Agenzia Fides) - "We hope that the tense political situation in the country is over, given that the new Prime Minister has taken office. We wish the new Prime Minister, Mohammad Shehbaz Sharif and the political parties united in supporting him the best. At the same time, it should be stressed that former Prime Minister Imran Khan was unable to increase employment, curb inflation. The members of his own party called for a vote of no confidence in Parliament": is the comment released to Fides by Fr. James Channan OP, Dominican priest responsible for the "Peace Center" in Lahore, after the new Prime Minister took office.
Fr. James Channan said: "Imran Khan failed to find a dialogue with opposition leaders and other political parties. Even in foreign policy his government entered into conflict with the United States and the European Union, penalizing the commercial activities of Pakistan and Pakistanis settled abroad". Furthermore, continues Fr. Channan, "the rapid devaluation of our currency has led to the increase in the prices of daily basic necessities and people have begun to fight for the daily livelihood.
The new Prime Minister in his first speech announced aid packages for the poor, announced a social aid package for Ramadan and raised the minimum wage to 25,000 rupees (about 125 euros). I hope these measures are a relief for the poor".
Last night, April 11, the new Prime Minister, Mohammad Shahbaz Sharif assumed the office of Prime Minister, after obtaining 174 votes from Members of Parliament belonging to 14 different political parties gathered in a single group called the "Pakistan Democratic Movement" (PDM), which includes the Pakistan Muslim League Nawaz (PMLN) and the Pakistan Peoples Party (PPP).
The election took place after the Supreme Court overturned the decision of the Vice President of Parliament, who had rejected the "motion of no confidence" against former Prime Minister Imran Khan, on April 3, 2022. (See Fides, 5/4/2022). The Supreme Court of Pakistan issued the verdict in which it states that the Prime Minister cannot advise the President to dissolve the Parliament and the Vice President cannot rule on the "motion of no confidence". On April 9, the Court ordered the session of the Parliamentary Assembly to continue to vote on the "no-confidence motion". Following the vote, on April 10, the new "Pakistan Democratic Movement" won and on April 11 the President of Parliament announced the imminent election of a new Prime Minister: Mohammad Shehbaz Sharif. The political party of Imran Khan boycotted the vote and the President of Pakistan, who belongs to the same political party of Imran Khan, also refused to preside over the swearing-in ceremony of the new Prime Minister, which was thus entrusted to the President of the Senate.
Commenting on the instability recorded in recent days, Fr. Lazar Aslam OFM Cap observes: "It was a delicate period, also marked by unethical language. We have to learn to respect each other. We must not promote the culture of offensive language".
Aqsa Kanwal, a Catholic woman committed to women's rights, tells Fides: "It was not nice to see all the political parties united to oust the Prime Minister. And it is a wound for democracy that more than 150 members of parliament resigned shortly before parliament elected the new Prime Minister. This damages the image of Pakistan". Fr. Gulshan Barkat OMI, speaking to Fides, says: "The Constitution of Pakistan is our reference. All institutions, including Parliament, the judiciary, the Armed Forces must respect it and work together for the good of the country. This is our country, we must work for its development and progress". (AG/PA) (Agenzia Fides, 12/4/2022)