AFRICA/BURKINA FASO - The kidnapping of Sister Tennyson, among the six Western hostages in the Sahel, has not yet been claimed 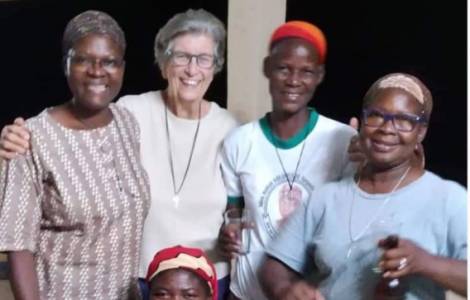 2022-11-30
More and more women in migratory flows: a conference in Ouagadougou

Kaya (Agenzia Fides) - The kidnapping of Sister Suellen Tennyson, missionary of the Congregation of the Marianite Sisters of the Holy Cross, kidnapped by force on the night between April 4 and 5, 2022 (see Fides, 6/4/2022) in northern Burkina Faso has not yet been claimed. "We are praying for Sister Suellen's safety and for her release - says Sister Ann Lacour, superior of the Marianist Congregation of the United States in Covington, Louisiana. We also pray for all those who have been victims of these groups, especially for our sisters who witnessed the vandalism and kidnapping. We are in contact with government leaders who have promised to keep us informed as they learn more". The Archbishop of New Orleans, Msgr. Gregory M. Aymond, has also joined the appeal: "For many years, Sister Suellen has served the people of the Archdiocese of New Orleans with great joy. Today we express our sadness and dismay at her kidnapping and we join in prayer for her safe return".
The community is located in Yalgo, in the province of Namentenga, between Kaya and Dori, two large cities in the north of Burkina Faso, a region that is often the target of jihadist attacks. "Several times I have expressed my concern for the nuns who work in the region, but they have always said that they feel safe, since they are only doing good for the population there", explains Msgr. Nare, Bishop of Kaya. "Our question is why did they take Sister Suellen? Where have they taken her?" the prelate says with concern. Sister Suellen joins five other Western hostages kidnapped in the Sahel of whom there is no news. Among these is the journalist Olivier Dubois, who announced his kidnapping in a video posted on social media on May 5, 2021 in which he claimed to have been kidnapped on April 8 in Gao, northern Mali, by the Support Group for Islam and Muslims (GSIM). On March 13, a video circulated showing a man who appears to be the French journalist addressing his relatives and the French government. German Jörg Lange, who worked with an NGO, was kidnapped on April 11, 2018 in western Niger and taken north, not far from the border with Mali. On October 14, 2016, American Jeffery Woodke, who was working with an NGO in Abalak, Niger, was kidnapped and probably taken to Mali, according to Nigerien security sources. On January 15, 2016, 82-year-old Australian surgeon Arthur Kenneth Elliott was kidnapped in Burkina Faso, along with his wife Jocelyn, who was released the following month. Iulian Ghergut, a Romanian security officer, was forcibly seized on April 4, 2015 from a manganese mine in northern Burkina Faso, near the borders with Mali and Niger. These are the only cases made public by government sources. (AP) (Agenzia Fides, 9/4/2022)