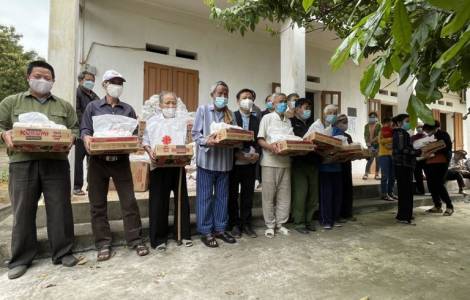 Hanoi (Agenzia Fides) - It is a Lent marked by works of charity that Catholics are experiencing in Vietnam. Practices of charity are promoted with enthusiasm because "faith develops through charity", say the faithful. As reported to Fides, among the various charity and solidarity initiatives, Caritas Hai Phong - the third most populous city in the country, about 100 kilometers from the capital Hanoi - has launched specific programs to help the poor, such as the opening of the “No Money Supermarket” for the poor, visiting and offering gifts to people in need. Catholic volunteers go to visit and console the patients of the Hai Phong Psychiatric Nursing Center and the Chi Linh Leprosy Hospital, all these gestures also help believers by sharing the spirit of Lent with them. Speaking of these charitable works, the director of Caritas Hai Phong, Fr. Joseph Nguyen Van Vang, thus addressed an appeal to the faithful of the diocese: "Although we know that our life is difficult because of the pandemic, there are many poorer people who live in very poor circumstances, they are in desperate need of spiritual and material support". Thanks to the contribution of many people, the so-called "No Money Supermarket" program of Caritas Hai Phong has distributed "shopping vouchers" to people in difficulty. Each voucher, in the local currency, is worth about 200,000 Vietnamese dong (about 8 euros) and is used to stock up on essential goods for free in this special supermarket, which has taken on an itinerant form .
On the first Sunday of Lent (March 6), more than 120 vouchers were delivered free of charge to the poor, orphans and victims of Agent Orange in Hai Phong. On the second Sunday of Lent (March 13), the supermarket moved to the parish of Xam Bo, also in the diocese of Hai Phong, with 152 vouchers delivered, especially to destitute non-Christians. Everyone was happy and excited when they received the gift because, through it, they also received care, support and comfort to overcome the challenges of life.
On March 27, the fourth Sunday of Lent, Caritas Hai Phong presented gifts to the lepers of the Chi Linh Lepers Hospital, in the province of Hai Duong, in the diocesan territory. With words of affection and human warmth, the volunteers gave a gift to 103 patients present, including essential items for daily life. Although the gifts are small, the human and spiritual worth brought to the disadvantaged here is great. When she received the gift, Ms. Doan Thi Vai confided: "We are happy to welcome this delegation because we are very lonely".
In the last days of Lent, with Easter approaching, Caritas Saigon has distributed grants to support 2,000 poor, of any religion, who reside in 99 parishes of the archdiocese of Saigon. This project was implemented by providing a monthly contribution to needy families of approximately 500,000 Vietnamese dong per month (equivalent to 20 euros), thanks to the special support of the "Catholic Business Association" in Saigon. Lonely elderly people, families with disabled people or poor students at high risk of dropping out of school are privileged. So far, 474 people in 13 parishes have received support from the program. In addition, Caritas of Hanoi announced on April 3 the free vitreous replacement surgery program for 100 poor brothers and sisters, of any religion, who reside in the territory of the archdiocese. This health program will be implemented on April 26, intended for patients who have been examined and who have received a doctor's indication for the surgery. (AD/PA) (Agenzia Fides, 8/4/2022)

ASIA/VIETNAM - Lent without restrictions: Catholics return to the churches