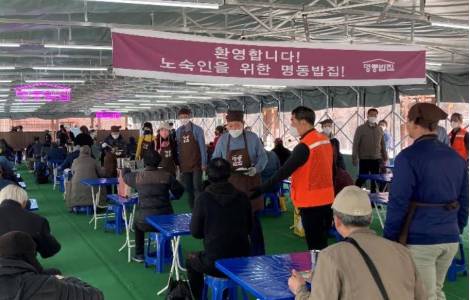 2022-03-21
Resignation of the Bishop of Cheongju and appointment

Seoul (Agenzia Fides) - "I hope he will keep his promises to restore justice with a policy of unity and not of division": said Archbishop Peter Chung Soon-taick when meeting , in his Seoul office, President-elect Yoon Suk-yeol and Korean Catholic MPs, the day after the election of South Korea's new president. Yoon Suk-yeol, former Attorney General candidate of the Conservative People Power Party (PPP), was elected president in the March 8, 2022 election, with the preferences of about 77 percent of Korea's 44 million voters. Msgr Peter Chung, Archbishop of Seoul and Apostolic Administrator of Pyongyang, received president-elect Yoon Suk-yeol, also Catholic like the previous Korean President Moon Jae-In, on March 30. After the meeting and conversation, President Yoon visited the "Myeongdong Babjib" soup kitchen, opened by Cardinal Andrew Yeom in January 2021, and, in a gesture of volunteerism and service to the poor, served meals to the homeless. During their first meeting last February, Archbishop Chung asked Mr. Yoon to "listen more deeply to the voices of the poor and needy". To keep his promise, Yoon, who was baptized into the Catholic faith with the name of Ambrosio, visited "Myeongdong Babjib", a soup kitchen run by the "One Body One Spirit Movement, and located right next to Myeongdong Cathedral. The facility provides free meals to homeless people every Wednesday, Friday and Sunday and welcomes approximately 1,500 homeless people each week. As reported to Fides by the Communications Office of the Archdiocese of Seoul, on the morning of the same day, Archbishop Chung went to the National Assembly of the Republic of Korea and presided over a Holy Mass for the group of Catholic deputies present, in the various parties, within the National Assembly. During the celebration, Archbishop Chung underlined that "for a Christian, the will of God should have priority over any rule of political parties", recalling that "we must reflect on our politics and see if it is fully imbued with the will of God". (PA) (Agenzia Fides, 5/4/2022)