AMERICA/PERU - The right to protest is legitimate, but violence must be condemned 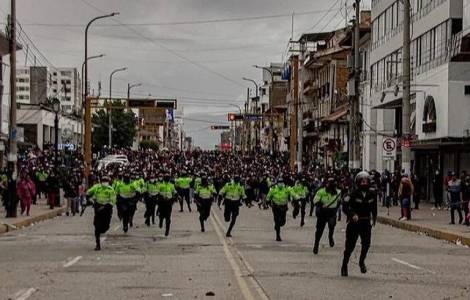 Huancayo (Agenzia Fides) - "The Church recognizes the legitimate right to protest, protected by our political Constitution (Article 2), and condemns the violence expressed in the blocking of roads because it prevents the free movement of people and the transport of food. Every human being’s food is a right that must be guaranteed". This was stated by Monsignor Miguel Cabrejos Vidarte, OFM, Archbishop of Truillo and President of the Peruvian Episcopal Conference, in a message entitled "Dialogue and conflict prevention are the path to the common good", released on April 2 after the incidents that occurred in Huancayo. Within the framework of the indefinite national strike of heavy cargo carriers and farmers, on its fifth day, on Friday, April 1, chaos broke out in Huancayo, Junín department, in the central region of the country.
According to information gathered by Fides, after noon hundreds of people caused violence, looting and attacks in various parts of the city. Companies were forced to close, as well as the main markets, following the attacks with stones. The provincial government building was also attacked, and there were clashes with the police. The toll is 3 dead, including a minor, and 22 arrests. The reason for the protest, which blocked several national highways, is the increase in the price of fuel and agricultural products. On Saturday afternoon, April 2, representatives of the trade unions and the government, who traveled to Huancayo, agreed to suspend the protests. The majority of transport workers signed the agreement, other sectors opposed it, such as the farmers' union, which gave the government five days to respond to their demands. Yesterday, Sunday April 3, the government of Peru issued a rule that temporarily exempts fuel tax. In addition, a decentralized session of the Council of Ministers is scheduled to be held in Junín on April 7. In his message on April 2, Archbishop Cabrejos Vidarte launches an appeal "to reject the use of violence, wherever it comes from, and to promote dialogue". He then underlines: "We share the concerns about the disproportionate increase in the prices of basic food, caused by the international rise in oil prices (War in Ukraine), but also by national factors such as political instability".
Finally, recalling that social conflicts and the consequent outbreaks of violence are a constant in the country, he asks that action be taken preventively and not as a reaction. "We hope that the timely identification of controversies will allow us to avoid acts of violence such as those we have seen this week in various parts of the country", concludes Monsignor Cabrejos Vidarte, who asks for the help of Jesus Christ, "God of life and peace", in the search for paths of understanding and respect. (SL) (Agenzia Fides 4/4/2022)