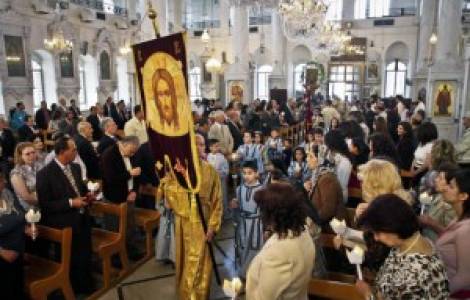 2022-06-03
"We are not celebrating two dead, but two risen in Christ". Lebanese Christians celebrate the beatification of Capuchins Leonardo Melki and Thomas Saleh, missionaries and martyrs

Bkerké (Agenzia Fides) - The document drawn up by the ecumenical team Nakhtar al Hayat ("Let's choose life") on the present and the future of Christians in the Middle East finds the full support of the Maronite Patriarchate, which takes it up and offers everyone, as a true "companion on the road", a precious tool to promote a realistic, non-pityful and fruitful approach to the problems and emergencies that characterize the condition and daily life of Christian communities in the Middle East. Maronite Patriarch Bechara Boutros Raï chose these demanding and non-formal words to express his full and grateful support for the document published in September by a group of 11 Christian theologians and scholars from the Middle East (see Fides, 28/9/2021) entitled "Christians in the Middle East: Towards the Renewal of Theological, Societal and Political Choices".
This dense contribution, divided into one hundred paragraphs, presents itself as a systematic attempt to examine in depth the current situation and the future prospects of Christian communities in the Arab and Middle Eastern context. The content of the document was presented and discussed during a symposium organized on the afternoon of Wednesday, March 30 at the Maronite Patriarchal See in Bkerké. Opening the symposium, Patriarch Rai suggested what he considers to be the strengths of the working text proposed by the ecumenical team Nakhtar al Hayat. In this document, underlined the Lebanese Cardinal, the starting point is a concrete and realistic diagnosis of the current condition of the Christian communities of the Middle East, presented taking into account the past history, the theological and liturgical traditions of the Churches of the Middle East and the current context of the Middle East, with its lights and shadows. The document, continued the Maronite Patriarch, exposes without rejection the urgencies and the factors of crisis which mark the present and the future of the Christian communities of the Middle East, then suggests with courage and prophetic spirit the ways to be followed and the changes to be experienced in order to preserve the vitality of the Christian presence in the Middle East and its fruitful contribution to the good of the peoples of the Middle East.
"This document", the Maronite Patriarch said among other things, "offers us a course to follow in all the events of our lives. The subject is the presence of Christ himself in the Middle East. The document also offers a platform to examine the emergencies and problems that affect the family, the Church, the State and society". The document relaunched by Patriarch Raï is the initiative of a group of specialists in theology, social studies and geopolitical questions. Men and women, ordained ministers and lay people, who wanted to discuss frankly and freely, even "on matters which some may consider unsuitable for public debate". The team, which has adopted a formula echoing a verse from Deuteronomy ("We choose life in abundance"), includes, among others, Professor Souraya Bechaalany, former General Secretary of the Middle East Council of Churches, the Lebanese Greek-Melkite theologian Gabriel Hachem, member of the International Theological Commission, and Maronite priest Rouphael Zgheib, National Director of the Pontifical Mission Societies of Lebanon. In the Middle East - we read in some of the most provocative passages of the document (see the summary proposed by Fides on (28/9/2021) - there are ecclesial realities which "in order to obtain aid from of certain American and European Christian groups, adopt discourses hostile to “living together”, moreover exaggerating the distress of Christians in the Middle East, whom they portray as being the victims of a persecution targeted and orchestrated by Muslims". Other ecclesial subjects rely on the strategy of the "alliance between minorities" or on the protection of authoritarian regimes as the only means of ensuring the survival of indigenous Christian communities in the Middle East. These are misleading choices and orientations, which risk weighing negatively on the future of Christian presence in the Middle East and denying the very mission to which the Church called in this part of the world has today dedicated her earthly life.
The document drawn up by the Nakhtar al Hayat group has received wide attention and positive comments from authoritative representatives of Catholic communities in the Middle East, including the Chaldean Patriarch Louis Raphael Sako and Archbishop Michel Sabbah, Latin Patriarch Emeritus of Jerusalem. The questions and also the uncertainties hanging over the future of Christians in the Middle East", said Patriarch Sabbah among other things, presenting the document "are not primarily a question of numbers, although numbers are important, but a matter of faith". (GV) (Agenzia Fides, 31/3/2022)

AMERICA/COLOMBIA - After the murder of three Awá indigenous people, the Bishop of Tumaco asks for investigations and protection