AMERICA - Keep praying for the gift of peace, trust in the power of prayer and the intercession of the Virgin Mary 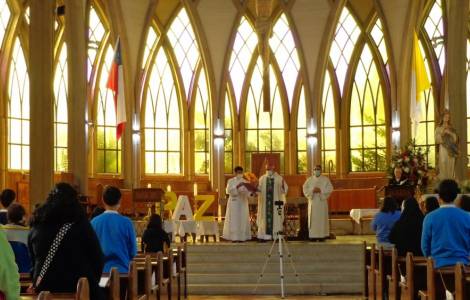 Bogotà (Agenzia Fides) - On this day when the Church celebrates the Solemnity of the Annunciation of the Lord to the Virgin Mary, all the Catholic communities of the continent have joined in the call of Pope Francis to invoke peace and consecrate the Russia and Ukraine to the Immaculate Heart of Mary (see Fides, 24/3/2022).
In Brazil, the Auxiliary Bishop of Rio de Janeiro and Secretary General of the Bishops' Conference of Brazil (CNBB), Mgr.Joel Portella Amado, presided over Mass in the Chapel of Our Lady of Aparecida, at the CNBB headquarters, which was broadcast on Catholic-inspired radio and television, as well as on social networks. In his homily, the bishop repeated that "war is not human", "war dehumanizes us all", war kills in us "what is most human, most divine, which is the dream of peace, the dream of communion and fraternity". Recalling Saint Paul's letter to the Ephesians, in which the apostle teaches that "Christ is our peace", Monsignor Portella commented: Jesus "generated communion, he generated fraternity, he overcame barriers, and therefore peace and fraternity become the reasons for our prayer, our desire and our commitment". He asked the Immaculate Heart of the Virgin Mary: "Intercede for us so that, in a certain way, we will never be contaminated by any form of violence, by any form of war. If war is not justified under any circumstances, peace is always justified". The Church in Bolivia celebrated the Consecration to the Virgin Mary of the nations at war, responding to the invitation of Pope Francis, from the Minor Basilica of Saint Francis in the city of La Paz. Monsignor Aurelio Pesoa, President of the Episcopal Conference of Bolivia (CEB), entrusted Russia and Ukraine to the Immaculate Heart of Mary by invoking the Virgin of Copacabana, Patroness of Bolivia. The celebration took place in the presence of the Apostolic Nuncio to Bolivia, Msgr. Ángelo Accattino, the Bolivian Cardinal Toribio Porco Ticona, the Archbishop of La Paz, Msgr. Percy Galván, collaborators of the CEB and the faithful of La Paz. The same Act was also celebrated in the 18 ecclesiastical jurisdictions throughout the country. The dioceses of Chile joined in the prayer for peace on March 25. Monsignor Cristián Contreras Villarroel, Bishop of Melipilla, invited people to ring the church bells and pray for peace in families, schools and various places. From the Shrine of the Immaculate Conception, the Diocese of Rancagua joined Pope Francis. The Bishop of Rancagua, Monsignor Guillermo Vera Soto, presided over the Mass which was broadcast on several social networks. The bishop invited people to continue to pray for the gift of peace and to trust in the power of prayer and in the intercession of the Blessed Virgin with her son Jesus. At the end of the Mass, the participants went in procession to the hermitage of the Virgin, located outside the temple, to perform the act of consecration. The main church of the Diocese of Osorno welcomed students from different Catholic institutes for the prayer for peace. In his homily, the Bishop, Monsignor Jorge, underlined: "In this humble prayer, from this Cathedral, and with you, young brothers, we have the opportunity to renew our commitment to God, and from our hearts, to raise a prayer for peace to be made possible in Ukraine and Russia, and in all places where there are conflicts, wars, discords, and for us to increasingly assume our commitment to peace". Monsignor Oscar Ojea, president of the Argentine Episcopal Conference, presided over Mass in the Basilica of Our Lady of Luján, praying especially for the gift of peace. In his homily, commenting on the biblical passage of Cain and Abel, he underlined that "it is necessary that the human being is always a responsible guardian of his brother and his sister, all the more responsible when he has greater decision-making responsibilities on other people. Applying this to our lives, we find with sadness that we live a kind of spirituality of war. It is striking how much violence we acquire in the social sphere and which manifests itself in gestures, attitudes, feelings and words. The war in Ukraine also represents the ideological violence that reigns in our society against those who do not think or feel like us". (SL) (Agenzia Fides, 26/3/2022)

AMERICA/HONDURAS - The Bishops: "Despite the difficulties, a new horizon is in sight"

EUROPE/RUSSIA - The Franciscans: let us ask God for the gift of peace