AMERICA/VENEZUELA - Week for life, to be "defended, promoted, respected and loved" 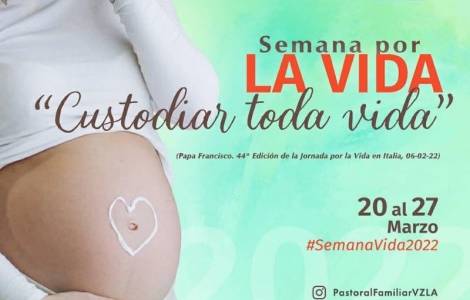 2022-06-20
The diocesan phase of the Synod towards its conclusion: the results of 4,000 meetings are processed

2022-04-11
Twelve university students, missionaries among the indigenous people of the Vicariate of Caroni

Caracas (Agenzia Fides) - From March 20 to 27, the Church in Venezuela celebrates the "Week for Life", on the occasion of the celebration of the Day for Life, which is celebrated on March 25, the Solemnity of the Annunciation of the Lord. Promoted by the Department of Family and Childhood of the Permanent Secretariat of the Venezuelan Episcopate, the Week for Life has as its motto "Guard all life", according to an integral vision of the importance of life in all its forms, inspired by the words of Pope Francis who stresses that the defense of life "applies to all, especially to the weakest categories: the elderly, the sick and even children who are prevented from being born" . According to a note sent to Fides, during the Week for Life, themes such as "A birth that brings hope", "The quality of life, an attribute of human dignity" and "The elderly, teachers of wisdom" will be discussed. The webinar "Quality of life, an attribute of human dignity", was held by Elvy Monzant, Executive Secretary of the Latin American and Caribbean Network on Migration, Refugees and Human Trafficking (CLAMOR), Executive Secretary of the Department of Justice and Solidarity of the Latin American Episcopal Council and Pastoral Director of Caritas Venezuela, who was inspired by the biblical quote "I have come so that they may have life, and have it in abundance". (Jn 10:10). The speaker affirmed that the person who loves "cares for and defends life" and that defending, promoting, respecting and loving life is a task that God entrusts to each person. He pointed out that in Venezuela, defending life means promoting the integral human development of all and respecting life from a perspective of absolute respect. "To love the life that God has entrusted to us is summed up in these 4 verbs: defend, promote, respect and love". Dignity "does not depend on skin color, gender, religion or economic status. We are all equal in dignity and rights", he stressed, reaffirming that "men and women have the same dignity. He then described some of the threats to human life today, such as abortion, euthanasia, the death penalty and war, among others. Finally, Mr. Monzant stressed the importance of making a preferential choice for the poor, following the example of Jesus, and addressed other aspects of human dignity, such as work, the universal destination of goods and integral ecology, citing the encyclical Laudato Sì and other messages from Pope Francis on the care of the Common Home. (SL) (Agenzia Fides, 23/3/2022)