ASIA/INDIA - Bringing God's love to the poor and the excluded: the mission of Sister Joseph, new Superior of the Missionaries of Charity 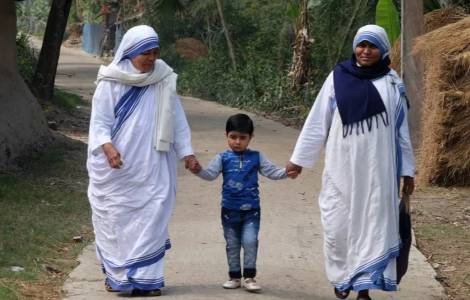 New Delhi (Agenzia Fides) - - "I thank God for the mercy granted to me through the gift of my vocation in the Congregation and now this new responsibility. With the guidance and blessing of God, I commit myself to adhere to the call to serve the poor and the needy. I have accepted this new responsibility in the name of God. Jesus will accompany me in my mission", says Sister Joseph Michael, new Superior General of the Missionaries of Charity, a religious congregation founded by Saint Mother Teresa of Calcutta, in an interview with Agenzia Fides. The nun says she is "ready to face the challenges that will arise along the way, always placing her life, her activities and her choices in the hands of the Lord". Sister Joseph Michael, 68, was elected the new superior of the "mother house" in Calcutta, eastern India, on March 12. "The vast experience of missionary work in different places and countries will give Sister Joseph the courage and strength to lead the Congregation of the Missionaries of Charity, always in the grace and light received from the Most High", says to Fides Msgr. Vincent Aind, Bishop of Bagdogra, West Bengal. The current geopolitical situation in the world and the political scenario at home will bring many challenges to the Congregation, notes the Bishop. In India, last December, the federal government refused to renew the authorization of the religious institute to receive funds abroad. After a suspension of about two weeks, the government granted the necessary authorization to carry out all its charitable works. According to Father Francis Sunil Rosario, priest of the Archdiocese of Calcutta and former editor of the English-language diocesan weekly, "The Herald", "Sister Joseph will be able to continue the commitment to the poor and the mission of the religious congregation, living according to her own charism".
Sister Joseph comes from Poyya, a village near Mala, in the district of Thrissur, in Kerala, a state of southern India. She was born in 1953. She has three sisters and one brother. Her parents (now deceased) and his brothers and sisters came from a deeply religious family, rooted in Christ and the values of the Gospel. Attracted by the simplicity and the spirit of poverty of the Missionaries of Charity and their sincere service to the poorest, she joined the congregation at the age of 17, in 1970, in what she calls "a sacred journey to serve Jesus and the poor".
She made her first religious profession in 1974 and worked in Melbourne, Australia for five years. She made her perpetual vows in 1980. She then carried out missions in Papua Guinea, the Philippines, the Czech Republic and Poland. In some missions, she was superior. Prior to her election, Sister Joseph was superior of the community of the Kerala region in southern India. "After these experiences, I can recognize the importance of love for the mission and for the poor. Living for Jesus and carrying out his mission is a daily call", says Sister Joseph.
Sister Joseph was Mother Teresa's secretary for many years. She is the third person to lead the congregation after Mother Teresa and the first Indian to lead the Missionaries of Charity. Sister Nirmala Joshi, of Nepalese origin, succeeded Mother Teresa from 1997 to 2009. Since 2009, Sister Mary Prema (Pierick), originally from Germany, led this Catholic religious congregation until March 13, 2022, when she resigned for health reasons. The Missionaries of Charity carry out missionary service in 110 countries. The congregation was founded by Mother Teresa in 1950 in the Archdiocese of Calcutta in eastern India. In 1952, the Indian government authorized Mother Teresa to open a house to serve the poor in Calcutta. Today, the Institute is home to over 4,500 sisters around the world who run orphanages, care homes for the terminally ill, care services for refugees, the blind, the disabled, the elderly, alcoholics, the poor and the homeless victims of floods, epidemics and famines. In addition to the institute for women, a religious institute for men and a secular organization were established. (SD-PA) (Agenzia Fides, 22/3/2022)