AMERICA/CHILE - Cardinal Aós: "We must not expect everything from those who govern us", everyone must play an active role to help the wounded society 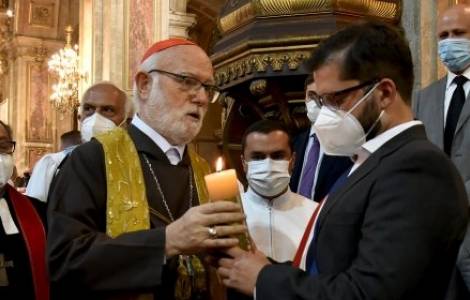 Santiago (Agenzia Fides) - "Every day we are faced with the choice of being good Samaritans or indifferent travelers. Every day we are offered a new opportunity, a new stage. We should not expect everything from those who govern us, it would be childish. We benefit from a space of co-responsibility capable of initiating and generating new processes and transformations. Let us actively participate in the rehabilitation and rescue of our wounded society". This is a passage from the homily delivered by the President of the Episcopal Conference of Chile, Cardinal Celestino Aós, Archbishop of Santiago, during the traditional ecumenical and interreligious prayer meeting held on Saturday March 12, in the Cathedral of Santiago, the day after the official swearing in of the new President, Gabriel Boric (see Fides, 11/3/2022). In addition to the President himself, the representatives of the various religious denominations and the members of the Standing Committee of the Episcopal Conference were present. Assuring the President and the authorities that God will enlighten their minds "so that they know what is good and what is bad, what is just and what is unjust", the Cardinal said in his homily: "We want and we are looking for a Chile in which we all live together respecting each other, listening to each other, dialoguing, collaborating, taking care of the poorest and treating nature responsibly". The Cardinal-Archbishop of Santiago then asked those who assume responsibilities in the political sphere to promote fraternity and, at the same time, a more effective social organization, because "politicians are called to be concerned with the fragility, the fragility of peoples and individuals". Regarding the challenges facing Chile today, the Cardinal stressed that "God created all human beings in His image and likeness. We belong to God and not to the State. God gave us rights which the State must recognize and respect. Men and women are equal in rights, duties and dignity; God called us and calls us today to live together as brothers and sisters". He then dwelt on the difficulties encountered by the country in recent years, due to the pandemic, political and social violence, attacks in the Araucania region and crime, "it hurts us, it worries us. Sowing violence is not life but death, it is not progress but regression". Overcoming the consequences of these situations is not only the task of those who exercise public responsibility, but of all Chileans, the Archbishop of Santiago stressed, citing health measures to contain the pandemic: "We are here to renew our conviction that we cannot expect everything from rulers, but that each of us is responsible for the good of all". Finally, the Cardinal made a special appeal for peace, which today is threatened throughout the world: "Chile needs us as peacemakers, as examples of dialogue, ready to generate processes of healing and reunion with ingenuity and audacity". (SL) (Agenzia Fides, 14/3/2022)

AMERICA/HONDURAS - The Bishops: "Despite the difficulties, a new horizon is in sight"