ASIA/SYRIA - Archbishop Marayati: Need to put some order in the flow of foreign aid 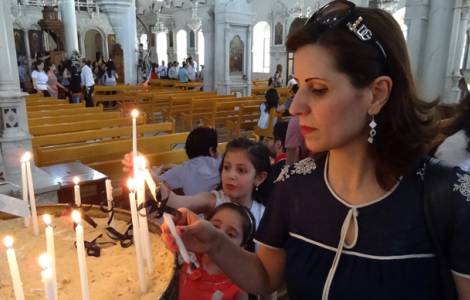 Aleppo (Agenzia Fides) - The conference which, in mid-March, will bring together in Damascus the leaders of the local Churches and the representatives of Catholic charitable organizations has a very concrete priority objective: to ensure that the material aid sent to Syria by the organizations and matters related to the Catholic Church are well oriented and arrive at the right destination. This information was confirmed to Agenzia Fides by Archbishop Boutros Marayati, Head of the Armenian Catholic Archdiocese of Aleppo.
The Damascus Conference will take place from Tuesday March 15 to Thursday March 17 at a conference center in the Syrian capital. About two hundred people will participate in the work, including Cardinal Mario Zenari, Apostolic Nuncio in Damascus, Cardinal Leonardo Sandri, Prefect of the Congregation for the Oriental Churches, and many Bishops of the Catholic Churches present in Syria. The conference will see the qualified presence of representatives of associations and organizations most involved in initiatives to support Christian communities in the Middle East, including those who participate as permanent members in the Meeting of the works for aid to the Eastern Churches (ROACO). "Sometimes" explains Archbishop Boutros Marayati "the distribution of resources arriving from outside seems chaotic. Everyone follows their own path, parallel channels are created. Thus, the most enterprising may be able to collect aid from various sources, while the less prepared, who often have the greatest needs, receive nothing. Even in the management of subsidies specifically intended for Christian communities, everyone seems to be concerned only with their own small garden. There are those who ask for help here and there, while some remain totally outside and risk starving to death".
The mobilization of outside groups and institutions - primarily Western countries - to raise resources and funds for the dispersed Christian communities in the Middle East raises fundamental questions about the present and future of the indigenous Middle Eastern Churches. Archbishop Marayati says: "What we are experiencing is an emergency. Today, without help, in certain situations, Christians would only have the prospect of becoming small communities of elderly people, doomed to disappear If everyone wants to leave, in the end only the old people stay, which is why we try above all to encourage opportunities and situations that will help young people to choose to stay in their own country, not to emigrate. That said, the question remains: do we have to live our whole lives with aid? An agreement will have to be found from a national point of view, by seeking a way out of the crisis. The drafting of the new Syrian Constitution is at stake. Negotiations are intensifying between government officials and some unarmed rebel components, which are against the Syrian government but have not chosen the path of military confrontation. We will see where we can go to from there. The condition of Christians in Syria, however, cannot be removed from the context of chaos, poverty and fear shared by all the other Syrians. "In Aleppo", says the Armenian Catholic Archbishop, "we continue our spiritual and ecclesial life. The churches are open. The schools are open. The economic emergency is today the most suffocating, for us Christians as well as for others. All goods are accessible with ration cards. They are used to obtain petrol, coffee, bread, gas. Everything is rationed. Prices on the black market are increasingly prohibitive, and only those with plenty of cash have access to it. The situation seems chaotic in areas - such as the regions of north-eastern Syria - where the territory is controlled by a patchwork of local and foreign forces, including jihadist militias still operating. The Kurds speak of this region as if it were an independent entity, now removed from the control of Damascus, the germ of the homeland that they have long wanted to achieve their national aspiration. "But if we consider all the factors at play" Archbishop Marayati points out, "we do not yet know what the overall plan is. There is no single Kurdish position, from a political point of view. In Aleppo, for example, there is a neighborhood under Kurdish control, which is in turn "controlled" by the Syrian army. This is another local situation that shows how complex the scenario in Syria is. The United States has military forces on Syrian territory that appear to support the Kurds. But this same United States is also allied with Turkey, which is against the Kurds in Syria, and leads manys military incursions into Syrian territory against them. And then there are the Russians on the coast, and also the militias that belong to Iran... It is a very complicated scenario, where the only way to avoid or reduce the suffering of the people is through compromise, reconciling different interests and perspectives. This is why, concludes Archbishop Marayati, we continue to demand above all an end to the sanctions against Syria, whose people, children, elderly and families in need are the only ones to suffer the inhuman and unjust consequences. Because the poor, in this whirlwind, are the ones who then pay the price". (GV) (Agenzia Fides, 11/3/2022)