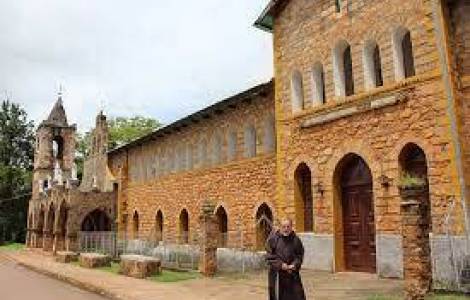 2022-06-20
The diocesan phase of the Synod towards its conclusion: the results of 4,000 meetings are processed

2022-04-11
Twelve university students, missionaries among the indigenous people of the Vicariate of Caroni

Caracas (Agenzia Fides) - "100 years of sowing the Gospel" is the title of the message of the Permanent Commission of the Venezuelan Episcopate, on the occasion of the centenary of the creation of the Apostolic Vicariate of Caroni, published on March 4, 2022. The message, sent to Fides, recalls the memorable day when "Pope Pius XI with the bull "Quoties Romani Pontifices" ordered: "Through these letters we separate from the aforementioned Diocese of Guyana part of its territory and erect and constitute it as an Apostolic Vicariate with the name of Caroni... we entrust it to the meritorious Order of the Capuchin Friars Minor of Saint Francis".
In the text of the Bishops, it is emphasized that the new ecclesiastical circumscription "was the pioneer among the particular Churches erected in Venezuela during the 20th century", a century that will see the creation of 26 Dioceses and 3 Apostolic Vicariates for the evangelization of indigenous peoples. On the occasion of this anniversary, the Bishops send their congratulations to the Bishop, the priests, the nuns and all the people of God in the region, asking God to "continue to accompany them and bless them in their commitment to announce the Gospel and to build the Kingdom of God in this part of our Venezuelan land". The commitment of the Capuchin Bishops who have succeeded one another in the history of the Vicariate is then recalled, as well as the many priests and lay people, thanks to whom "many works of evangelization, education, study and deepening of the culture of the peoples who live there, as well as the formation of indigenous pastoral workers, have arisen". The missionary work of the Capuchins was also joined by the Capuchin Tertiaries and the Franciscan Sisters of the Sacred Heart of Jesus. The message then retraces the main stages in the history of the Vicariate, emphasizing the awareness that the Capuchin missionaries had of the importance "of culture in itself and for evangelization", which resulted in the use of the local language, the study and dissemination of the culture of the Pemon people, the writing of a dictionary and the collection of various local traditions. "The presence of the missionaries has always been the voice of the voiceless, the defense of the rights of people and of integral ecology, as Pope Francis defines it today".
Due to the lack of personnel, the Capuchins left the pastoral direction of the Vicariate in 2021 to the Venezuelan Church, in the pastoral care of the Diocese of San Cristóbal (see Fides 28/4/2021; 21/7/2021). This fact, the Bishops noted, highlights three important elements in the life of the Church in Venezuela: unity and continuity in the work of evangelization; the missionary dynamism and ecclesial communion between the dioceses, always open to the universality of the Church; and finally, it is a demonstration of synodality. The celebration of the centenary of the Apostolic Vicariate of Caroní coincides this year 2022 with the celebration of other centenaries: of the Diocese of San Cristóbal and the Archdioceses of Valencia, Cumaná and Coro, recalls the message, inviting us to contemplate the action of the Holy Spirit, who continues to manifest himself and invites us to look to the future with hope. Finally, the Permanent Commission of the Venezuelan Episcopate invites us to praise God for these 100 years of evangelical sowing, in a land with a complex geography, with great distances, difficult communications, the scarcity of workers, the dispersion of the population, obstacles which "have at the same time been a stimulus for the work of evangelization". The Apostolic Vicariate, which includes the Venezuelan state of Bolivar, was erected on March 4, 1922. It has a population of 91,100, of whom 57,700 are Catholic. There are 6 parishes, 2 diocesan priests and 6 religious, 4 religious non-priests and 3 nuns. Archbishop Gonzalo Alfredo Ontiveros Vivas was appointed Vicar Apostolic of Caroni by Pope Francis on April 28, 2021. (SL) (Agenzia Fides, 5/3/2022)