EUROPE/UKRAINE - Franciscans close to the people "with prayer, lunch and words of encouragement" 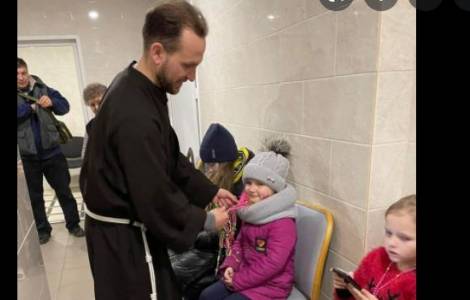 Konotop (Agenzia Fides) - "Despite the great tension in society, anxiety and widespread panic, in our Convent, together with Father Florian OFM, with volunteers and parishioners, we are at the service of people with prayer, support, offering lunch, hot tea and words of encouragement". This is what Friar Minor Fr. Romualdo Zagurskyi OFM, among the Franciscans living in the city of Konotop, in north-western Ukraine, 90 km from the border with the Russian Federation reports in a message sent to Fides. On February 24th, at 5:20 am, the bombing began in the territory of the region, the echoes of which were also heard by the residents of Konotop. According to the General Staff of the Armed Forces of Ukraine, the city of Konotop was taken by the Russian army on the morning of February 25, 2022.
"This information - reports the friar - caused despair among the residents; our parishioners met panicked people in the middle of the street. People kept arriving and we had a great need to buy food. Many elderly people who were alone and frightened remained locked up in their own homes. In the occupied city we were only able to partially purchase the necessary products".
Father Romualdo recalls the shock of the beginning of the war: "At that moment, I was in retreat with my brothers in Zhytomyr, where in the morning the airport was also bombed. At the request of the parishioners, as parish priest of Our Lady of Fatima, I urgently left for Konotop. Our Convent is open to anyone in need of protection, shelter or food and so far we have hosted 23 people who stayed for the night, mostly women and children".
"On the evening of the same day a large-scale battle took place in our city: buildings were set on fire and there were bombings and destruction of educational institutions. Firefighters immediately intervened. We saw that the center of the city burned, even during the Divine Liturgy, which was celebrated in our Convent. Now the catechism class serves as a place to stay overnight for people and a refuge room for children during the day". The friars receive requests for urgent help from people who have fled from Konotop: "We, together with the residents of the city, organize food collections for their needs and buy products", he explains.
The Franciscan concludes with a heartfelt appeal for peace: "Now more than ever, our Franciscan charism of bringing peace and goodness is revealed where there is restlessness, darkness, war. The children who come to our reception centers play, watch cartoons and they even forget that there is a war, and some adults, perhaps for the first time in their life, take the Rosary, pray on their knees, learn to sing religious songs and experience true peace, which cannot be achieved through tanks or other weapons. We believe in the peace that Jesus Christ left, as the Gospel of John (Jn 14:27) says: "Peace I leave with you; my peace I give to you. Not as the world gives do I give it to you. Do not let your hearts be troubled or afraid". (PA) (Agenzia Fides, 2/3/2021) 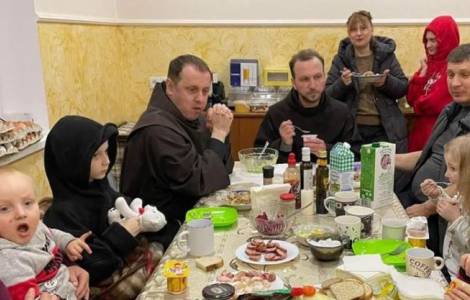