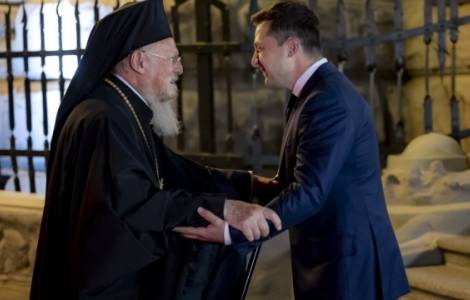 Istanbul (Agenzia Fides) - "Thank you for this warm conversation, Your Holiness Bartholomew. Your words are like hands that support us in this difficult moment". This is how the President of Ukraine Volodymyr Zelensky wanted to thank the Ecumenical Patriarch of Constantinople, Bartholomew I, for the spiritual support that the "primus inter pares" among the primates of the Orthodox Churches gave him and the entire Ukrainian nation, on the third day after the entry of the Russian armed forces into Ukrainian territory. Sources close to the Ecumenical Patriarchate confirm to Fides that it was Zelensky who sought telephone contact with Patriarch Bartholomew on the evening of Sunday, February 27.
"Ukrainians feel the spiritual support and strength of your prayers. We hope for the fastest possible peace", added the Ukrainian President in the message posted on his twitter account to give an update on the telephone conversation he had with the Patriarch. In a message released on Thursday, February 24, in the hours when the first news of the Russian military invasion in Ukraine was spreading, Patriarch Bartholomew expressed his "deep sadness" at what he described as a flagrant violation of all notion of international legitimacy. Bartholomew had also expressed his closeness to the Ukrainian people and his intention to defend the integrity of his homeland. "We must pray", added the Patriarch of Constantinople, "so that our God, the God of love and peace, enlightens the leaders of the Russian Federation, so that they understand the tragic consequences of their decisions and their actions, which can also trigger a world War".
In August 2021, Patriarch Bartholomew, at the invitation of President Zelensky, participated as a special guest in the celebrations organized in Kiev to mark the 30th anniversary of Ukraine's independence. On this occasion, Zelensky had already thanked Patriarch Bartholomew for his "unconditional personal support for the sovereignty, territorial integrity and independence of Ukraine", as well as for his "prayers for peace".
In recent years, the most serious divisions within Orthodox Christianity have had their epicenter in Ukraine. The confrontation which led to the split between the Patriarchate of Constantinople and the Patriarchate of Moscow had from the very beginning shown its link with the conflicts fomented by nationalist feelings and aims for geopolitical domination. The conflict between the Church of Constantinople and the Church of Moscow had taken increasingly serious forms and tones after the Ecumenical Patriarchate of Constantinople granted on January 6, 2019 the so-called "Tome of Autocephaly" to the Ukrainian Orthodox Church, legitimizing from the canonical point of view the emergence of a Ukrainian ecclesial structure totally detached from any link of hierarchical subordination to the Moscow Patriarchate. In the first months of independence, the newly independent Ukrainian Orthodox Church became immediately involved in the uncertain Ukrainian presidential elections scheduled for March 31, 2019. Incumbent President Petro Poroshenko had been a decisive co-leader and sponsor of the whole process, which ended with the granting of autocephaly to the Ukrainian Orthodox Church, headed by Metropolitan Ephiphany. During the last months of the electoral campaign, Poroshenko's agenda had been marked by trips to the urban areas of the various Ukrainian provinces in the company of Metropolitan Epiphany and other senior representatives of the new independent Ukrainian Church, in order to celebrate the granting of autocephaly in a long series of "thanksgiving ceremonies". Despite Poroshenko's efforts, it was Volodymyr Zelensky who became president with 73% of the votes cast in the second round of the election.
The current Ukrainian president, who grew up in the Russian-speaking town of Kryvyi Rih in eastern Ukraine, comes from what he called "an ordinary Soviet Jewish family", adding that most Jewish families in the Soviet Union were not religious". During World War II, much of the 44-year-old Zelensky's family died at the hands of the Nazis. His grandfather Semyon Ivanovich Zelensky fought during that conflict under the flags of the Red Army. In January 2020, President Zelensky participated in Israel in the 75th anniversary of the liberation of the Auschwitz death camp by Soviet troops. (GV) (Agenzia Fides, 28/2/2022)