EUROPE/UKRAINE - Orionines and Salesians, committed to welcoming refugees, remain in their place, "trusting in Providence" 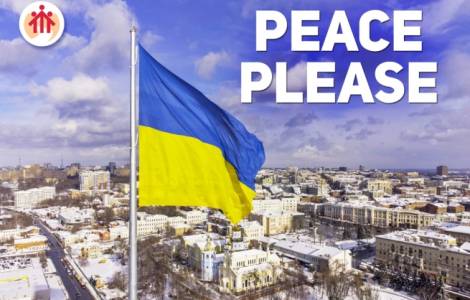 Rome (Agenzia Fides) - "The Sisters of Don Orione are in Korotycz, near Kharkiv, together with more than 40 mothers and children. Unfortunately, they have not been able to move and live with them this moment of great tension, sometimes even in environments set up as a refuge. However, they showed great confidence in divine protection and asked for our prayers". This is what the general director of the Sons of Divine Providence, Father Tarcisio Vieira, and the superior general of the Little Missionary Sisters of Charity, Mother Mabel Spagnuolo, write in a joint appeal, sent to Fides, on the situation in Ukraine where there are religious men and women from the Orione Charismatic Family.
"In addition to the small group of disabled children - they underline - who reside within our structure, our confreres from L’viv have been supporting many poor families in the region for some time. Now, despite the difficulty of the moment, they welcome refugees arriving from other cities in Ukraine". "In order to meet their needs in the current circumstances", they add, "the most immediate and direct assistance is to participate in the fundraising campaign organized by the Don Orione Onlus Foundation (www.fondazionedonorione.org) for the benefit of the two Orione organizations in Ukraine".
In the current situation in Ukraine, the Salesians present in the country are doing everything they can for young people and the population in need. "Unfortunately, the situation continues to be tragic. We are preparing for even more difficult times - Fr. Mykhayl Chaban, Superior of the "Mary Help of Christians" Vice Province of Ukraine of the Greek Catholic rite (UKR) tells ANS -. We do not know how long this war will last, so we have to be ready for an even longer period". "There are many victims among the soldiers, but also among civilians - he continues -. The whole world is waiting for immediate decisions to stop the aggressor. Throughout Ukraine there is a risk of bombardment. Our capital, Kiev, is suffering greatly today, as are the border regions of Russia. People flee their homes". The Salesians are present in the big cities of the country: Kiev, Lviv, Zhytomyr, Dnipro, Odessa, as well as in Korostyshiv, Peremyshlany and Bibrka, and remain close to the population, trying to give hope. Currently, the Salesians are already hosting a hundred minors in their shelters, giving priority to children from orphanages, and they hope to be able to accommodate hundreds more in Lviv with the arrival of the first refugees from the east of the country. "I ask you first of all to pray for Ukraine and also to be welcoming if refugees arrive in your country. I thank you for your help and your support", concluded Father Chaban. Father Marcin Kaznowski, Superior of the "St. Hyacinth" Province of Poland-Cracow (PLS), which has works in Ukraine, declared: "The outbreak of war in Ukraine is a great drama that has affected local society and the whole of Europe. Our Salesian confreres are among those whose life is at risk. The confreres are aware of the dangers that may exist, but they are serene and trust in God's Providence. Everyone has informed me that they are ready to remain there to accompany their faithful and the young people entrusted to them in this difficult moment". (SL) (Agenzia Fides, 28/2/2022)