EUROPE/UKRAINE - The war in Ukraine and the pain of the Eastern Churches: "the only one who benefits from it is the devil" 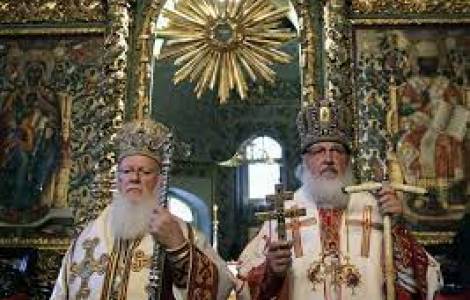 Kiev (Agenzia Fides) - "Wars are a defeat for all parties involved. The only one who enjoys them is the devil, who already dances on the heads of corpses, and plays with the pain of widows, orphans and grieving mothers". With these words, Anba Raphael, Coptic Orthodox Bishop at the head of the diocese which includes the central part of Cairo, expressed with a strong and evocative image the confusion which crosses the leaders and entire communities of the Eastern Churches in the face of the ongoing conflict in Ukraine. In recent years, Russian President Vladimir Putin had aimed to credit his image as a defender of local Christian communities in the Middle East as well. This is one of the reasons for the unanimous consternation expressed by the patriarchs and authorized representatives of the Eastern Churches at the conflict in Ukraine, at a military campaign involving brotherly peoples whose identity is intimately marked by traditional Christianity Eastern Byzantine. In recent years, the most serious divisions within Orthodox Christianity have had their epicenter in Ukraine. The confrontation which led to the split between the Patriarchate of Constantinople and the Patriarchate of Moscow had from the start shown its link with the conflicts fomented by nationalist feelings and aims for geopolitical domination. The conflict between the Church of Constantinople and the Church of Moscow had taken increasingly serious forms and tones after the Ecumenical Patriarchate of Constantinople granted on January 6, 2018 the so-called "Tome of Autocephaly" to the Ukrainian Orthodox Church, legitimizing from the canonical point of view the emergence of a Ukrainian ecclesial structure totally exempt from any constraint of hierarchical subordination to the Patriarchate of Moscow. Today, faced with the military campaign launched by Russia on Ukrainian territory and the tragic and unpredictable scenarios of the war, the words and appeals expressed by the Patriarchs and the official representatives of the various Orthodox Churches also seek to guide the communities struggling with an inevitable and painful spiritual disorientation. Patriarch Ilya II, Primate of the Autocephalous Orthodox Church of Georgia, prays for the people of Ukraine. "We know from the bitter experience of Georgia how important the territorial integrity of each country is", added the Patriarch of the nation where, in 2008, the Russian armed forces intervened on the grounds of protecting the autonomy prerogatives of the regions of Ossetia and Abkhazia.
Patriarch Daniel, Primate of the Orthodox Church of Romania, said in statements by the media that he had "taken note" of Russia's military campaign against "an independent and sovereign state", and that he hoped that diplomats around the world would quickly reactivate the channels of dialogue in order to remove the specter of war from Ukraine and all of Europe. The Ecumenical Patriarch of Constantinople Bartholomew I, "primus inter pares" among the primates of the Orthodox Churches, expressed in a message published on Thursday February 24 his "deep sadness" for what he described as a flagrant violation of any notion of international legitimacy. Bartholomew also expressed his support for the Ukrainian people and their intention to defend the integrity of their homeland. "We must pray", added the Patriarch of Constantinople, "that our God, the God of love and peace, enlighten the leaders of the Russian Federation so that they understand the tragic consequences of their decisions and their actions, which could even start a world war".
Archbishop Ieronymos of Athens, head of the Orthodox Church of Greece, expressed similar feelings of spiritual closeness to the Ukrainian people.

Metropolitan Onofry himself, Head of the Ukrainian Orthodox Church, which remains linked to the Moscow Patriarchate, issued a first message condemning what he called Russia's military campaign of "invasion" on Ukrainian territory (the message has now been removed from the official Church website). For his part, the Patriarch of Moscow and All Russia, Kirill, has so far issued a message, published on February 24, in which he declares to take responsibility "with deep and sincere sadness" for the suffering caused by the "ongoing events". In his message, the head of the Russian Orthodox Church does not enter into the merits of the reasons and responsibilities of the conflict. Kirill speaks as the Primate "of a Church whose flock is located in Russia, Ukraine, and other countries, empathizing with everyone affected by this tragedy". The Russian Patriarch calls on all parties to the conflict to do "everything possible to avoid civilian casualties" and recalls that the Russian and Ukrainian peoples have a common centuries-old history dating back to the Baptism of Rus' by Prince St. Vladimir. "I believe that this God-given affinity will help overcome the divisions and disagreements that have led to the current conflict", the Primate of the Russian Orthodox Church added, calling on everyone to provide all possible help to those who will suffer the conflict in the flesh of their life. (GV) (Agenzia Fides, 26/2/2022)