ASIA/VIETNAM - Letter to the authorities: the Archdiocese of Hanoi calls for respect for religious freedom 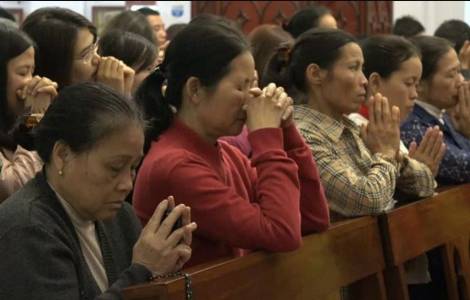 2022-11-29
Going out of oneself to meet God and neighbour: the mission of young people, who are not afraid to touch misery, poverty and violence

2022-10-24
New Catholic church in the north-east of the country, among the "hill tribes": state media reports

2022-10-08
"Strengthening communion", central theme of the new pastoral year in the Church of Vietnam

Hanoi (Agenzia Fides) - The Catholic Church in Hanoi has sent a letter of urgent complaint to various leaders, civil servants and civil authorities, at provincial and national government level, asking the "People's Committee" of the province of Hoa Binh to respect the religious freedom and pastoral activities of the Catholic faithful in the province. The note, sent to Fides, is signed by Father Alphonso Pham Hung, pastoral director of the Archdiocese of Hanoi. The letter - it is said - is related to the unpleasant incident that occurred on Sunday, February 20, 2022, at 10 a.m., when the Archbishop of Hanoi, Msgr. Joseph Vu Van Thien, was celebrating a mass in the parish church of the city of Vu Ban, in the district of Lac Son, in the province of Hoa Binh, located in the northwestern part of Vietnam (see Fides, 22/2/2022) . At the moment of Communion, two people entered the church, took the microphone from the pulpit and ordered those attending mass to disperse. They are, reports the note sent to Fides, Pham Hong Duc, secretary of the Communist Party of the city of Vu Ban, and Pham Van Chien, vice-president of the People's Committee of the same city.
The Archdiocese of Hanoi said: "This is a disrespectful act, an abuse of power that seriously violates the right to religious freedom, the right to religious practice of bishops, priests and lay people, and which denigrates the holy rite of the Eucharist, which is the most sacred and important liturgy for the faith of Catholics. This gesture is unacceptable in a country where the rule of law prevails; it has aroused indignation and the pain of those who attended the mass as well as all those who saw the images on the web and social media". The note from the Church of Hanoi has been distributed to all the faithful of the Archdiocese. Archbishop Joseph Vu Van Thien asked that "everyone pray and that the problems of practicing our faith in the province of Hoa Binh will soon be". Hoa Binh is a mountainous province in northwestern Vietnam, covering an area of 4,595.2 km2 and has a total population of 854 thousand from six ethnic groups: Muong, Kinh (Viet), Thai, Dao, Tay and Mong. According to 2019 statistics, the province has about 21,000 Catholics, partly in the territory of the Hung Hoa Diocese and partly in the territory of the Archdiocese of Ha Noi. Among the 11 parishes belonging to the Archdiocese of Ha Noi, there is the parish of Vu Ban, which houses 450 parishioners entrusted to the pastoral care of Father Francis Xavier Tran Van Liem. (AD-PA) (Agenzia Fides, 26/2/2022)