AMERICA/COSTA RICA - "Encounter, listen, discern" so that the whole of society may walk in communion, with the participation of all 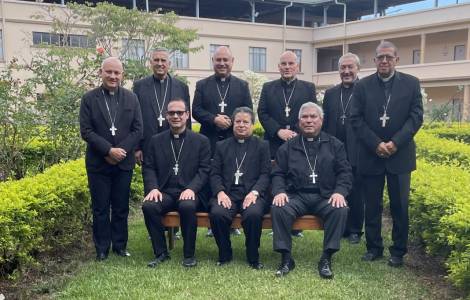 2022-06-13
Fishing bans by the Institute of Fisheries: Thousands of fishing families without a living

2022-05-31
Diploma in Communication and Catholic Media: "A difficult mission for which we must prepare"

2022-05-20
Meeting of the Bishops with the President of the Republic: "Listening is essential to perceive reality"

2022-05-18
Bishops' appeal: "The wave of corruption and criminality that is devastating our society is unacceptable"

San José (Agenzia Fides) - At the end of their plenary assembly, which took place from February 21 to 24, the Bishops of Costa Rica published a message addressed to all believers and all people of good will, which is entitled with three verbs used by Pope Francis in the opening Mass of the Synod of Bishops on synodality (October 10, 2021): “Encounter, listen, discern”. The universal Church is living this process convened by Pope Francis in a spirit of synodality, and the Bishops ask that Costa Rican society also "walk in communion, with the participation of all, seeking the common good".
Regarding the first verb, "to encounter", the message of the Episcopate observes that "the current situation in Costa Rica shows increasing numbers of poverty, extreme poverty and unemployment; there are many of our brothers and sisters who are excluded, it is time to meet everyone, there is no room for delay". Therefore, "courageous decisions are required, many of which must be taken by the new rulers ... to overcome the shameful figures that cannot continue to occur in our country". They reiterate the need for the political forces that have presented themselves in the elections, "to carry out concrete projects for the benefit of the whole population, not just a few". "Our people deserve a Parliament in which the best ideas are expressed and those laws that are for the benefit of all are approved", they underline, recalling that this path of encounter was also proposed to the two candidates for the Presidency of the Republic, in the next ballot on April 3 (see Fides, 9/2/2022). Taking a cue from the second verb, "listen", the Bishops note that in the last elections "citizens clearly showed their disenchantment and their political apathy and the distancing and distrust of the political class that does not keep its promises is undeniable". The crisis of the political representativeness of the citizens, 60% went to vote, requires listening to understand their reasons. "Costa Rica needs to walk and strengthen the welfare State by law, because 'social peace' is not reduced to just a speech, it is necessary that social peace is lived in a real and reliable way, decisively attacking the corruption that has hit our society ... Costa Rica demands prompt and complete justice for so many scandals", the message points out.
Among the social sectors that need to be heard, the Bishops mention working women who still do not receive a fair wage; women who have suffered physical or psychological violence; the indigenous population marginalized by oblivion and poverty; those who live on the street, abandoned to their fate; the unemployed who have never had a concrete job opportunity for a long time; entire families unable to afford decent housing; and students who do not have adequate technological tools within their reach that allow them not to be left behind, as has happened in the last two years.
The Church is experiencing the process of "discernment", "which also invites us to meet and listen to those who have felt marginalized or who have distanced themselves, because our attitudes do not conform to what the Lord asks of us in the Gospel". For this reason, the bishops highlight the invitation "to listen to the Word of God, to meet Him, to discern what He wants from each of us, not only in our life as Church, but in our actions and responsibilities where we are called to live".
The message concludes by reiterating that "we are committed to contributing to improving life in society, both for Catholics, believers in general and people of good will: only in this way will we be able to meet and feel listened to in order to discern the right path that leads us to be a better country". Finally, the Bishops of Costa Rica join the appeal of Pope Francis who calls to live a day of prayer and fasting for peace in Ukraine: "Let us pray to stop all forms of war! We ask the Lord to guide and protect humanity". (SL) (Agenzia Fides, 25/2/2022)

EUROPE/RUSSIA - The Catholic community of Moscow: in the face of war, pray for peace, hope in God, touch the wounds of the suffering

AMERICA/VENEZUELA - The diocesan phase of the Synod towards its conclusion: the results of 4,000 meetings are processed