ASIA/AFGHANISTAN - Integrating refugees into society: the commitment of the Pro Bambini Association of Kabul 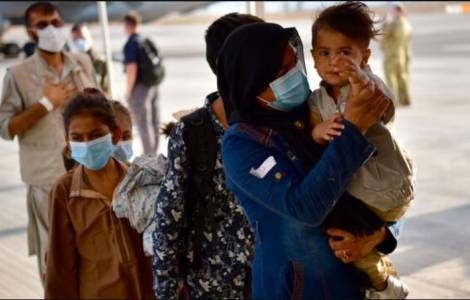 Rome (Agenzia Fides) - "Since the end of August, we have been committed to allowing the transfer of our staff and their families from Afghanistan with the Pro Bambini Association of Kabul, because, having collaborated with a Western and moreover Christian reality, the advent of the Taliban put these people in serious danger.
We managed to get about fifteen families to Italy. Now our goal is their effective integration into our society". This is what Father Matteo Sanavio, of the Congregation of Rogationist Fathers and contact person of the Pro Bambini Association of Kabul (PBK), tells Fides. It is an inter-congregational reality (which welcomes, that is, nuns of different Orders) born on the initiative of the Guanellian priest, Fr. Giancarlo Pravettoni in order to respond to the request of John Paul II who, in his Christmas speech in 2001, launched an appeal to the world to save Afghan children. The three nuns who ran the association took care of the education of about forty children with Down syndrome.
Fr. Sanavio highlights: "Due to the seize of power by the Taliban, we had to stop our activity. Now, from a distance, we are trying to settle the bureaucratic issues related to the structure, to avoid paying economic consequences: the ministries were taken over by the Taliban, but the officials and employees of the various offices remained the same, so we managed to keep a certain dialogue with the institutions. At the same time, we are trying to transfer part of our activities to some NGO that survived on the spot and that has the possibility to continue its work, which we are not allowed to do because it was based above all on the work of the sisters, with the collaboration of the Afghan staff. It is a real shame: our association in Kabul was a beautiful seed of charity and a prophetic sign". The priest then reports that the end of activities in Kabul did not interrupt the work of the PBK association: "Now that the prospect of local help has been interrupted, we are trying to take care of the families who have come here and accompany them on this path of inclusion into the Italian reality. Half of the families were welcomed into religious communities in and around Rome. We are following them thanks to the program of the Community of Sant’Egidio, which has the experience and tools available to welcome and integrate foreign people. Other families are scattered in various parts of Italy because they preferred to stay in the first reception places, where the children had already been welcomed in September, when school began. And given what they had been through, we decided not to cause them further trauma related to moving to other cities".
The children are also those who, among the refugees who have arrived in Italy, are experiencing the adaptation phase better: "It is easier for them to learn the language and make friends, because they are stimulated by school activities. We are having some difficulties, especially with adults and the elderly, who are often overcome by the temptation to close themselves in the circle of their friendships. Precisely for this reason, we are trying to 'force' them to leave their homes a little, to learn the geography of the place to access various services and to go to the offices. Furthermore, Italian courses for foreigners have been organized for all of them", explains the priest, who adds:" We asked the religious communities for a long-term reception, to give these people time to find a job, so that they may feel useful. Certainly, at the moment they feel privileged, because despite having had to abandon everything, they have rediscovered their freedom. On the other hand, they are not alone: we are here as well as the sisters who have welcomed them".
In addition to the staff of the Pro Bambini Association of Kabul, in that last humanitarian corridor of August 2021, the sisters of Mother Teresa were also able to leave, who welcomed and cared for the marginalized in society in the Afghan capital: "Kabul, the Missionaries of Charity took care of what were considered 'waste of waste', that is, children and young people with very serious disabilities, who were abandoned by families on the side of the streets, because in Afghanistan there is no assistance for these people and disability is considered a disgrace to be hidden. These sisters have managed to bring to Rome all the disabled children, who now live in their community and are followed and assisted in everything".
The arrival of Catholics in Kabul dates back to 1921: in that year King Amanullah agreed to the requests for Catholic religious assistance from Western diplomats. Italy, among the first countries to politically recognize the independence of Afghanistanistan from England, was immediately involved: Pius XI therefore decided to entrust the mission to the Barnabites. An agreement was stipulated between the Afghan and Italian governments and the Holy See, which has never been revoked over the years, which included only one real condition: to avoid any form of proselytism among the local population, almost all Muslims. In 2002, what was initially a simple spiritual assistance within an embassy, was elevated to Missio sui iuris by John Paul II. (LF-PA) (Agenzia Fides, 24/2/2022)