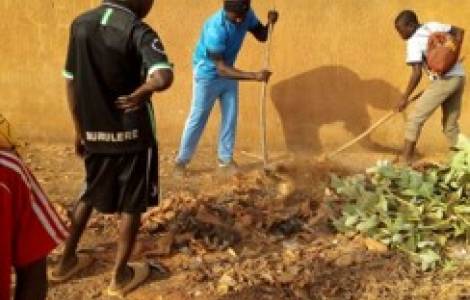 Niamey (Agenzia Fides) - "With the street children I met in Niamey, we organized a cleaning campaign in a field near our house", says Gilles, a Nigerian journalist who spends most of his time with these young victims in the Nigerien capital. "Machetes, rakes to cut, collect, sweep and burn rubble, we worked for two days. During these two days, the young workers felt useful and important for themselves and for society, forgetting at least temporarily the violence they had suffered, and no longer having to steal food to feed themselves", continues Gilles, who created the "Foyer totonn Gilles" in Niamey 15 years ago. Today, the house is home to about fifteen young people, aged 4 to 20. They are children who have years of suffering and violence behind them on the streets of Niamey, without shelter or safety, abandoned to themselves. They came to the capital in search of fortune. This last group has been with us for a month - explains Gilles, who organized the house together with his wife and children - we approached them several times before they decided to join us. They finally left the street and returned to their families and forgot the ordeal of the city, far from their loved ones and for years. For the past fortnight, there have also been Malians, migrants fleeing the war who have promised to bring their mothers what they have been paid for their work. They live in a rented house in rather difficult but decent conditions and form a very heterogeneous family. Gilles, with his salary and the donations of a few benefactors, devotes his whole life to this, to these children, victims of the violence of war, of family or society, of exploitation. He himself had a similar experience: his father beat him almost every day and he ran away when he was only thirteen. Almost every evening, he visits the street children of the city, meets them, greets them, discusses a thousand things with them, helps them and is generally their defender and their lawyer in front of the police. Many young people have passed through the center and have now found a place in society, found a job, got married, have become independent. Gilles calls them his pride. (RC/AP) (Agenzia Fides, 22/2/2022) 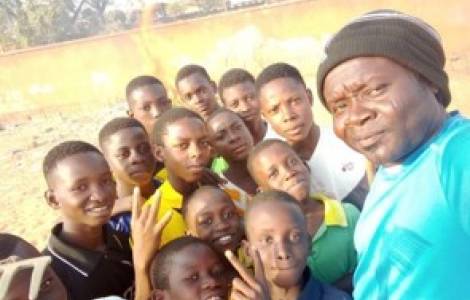