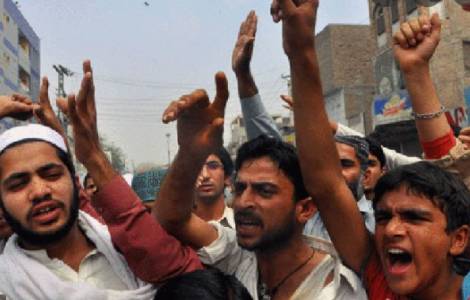 Khanewal (Agenzia Fides) - "The violence and murders committed in the name of blasphemy by religious fanatics in Pakistan have become a serious threat to the state. Because of religious extremism in the province of Punjab, the whole image of Pakistan is suffering. I am deeply saddened to learn of the brutal murder of an innocent man. A mentally ill person is lynched by a mob of religious extremists. This is not a teaching of Islam. Religious extremism in all its forms must be condemned. We still remember the recent incident in Sialkot (where, on December 3, 2021, a mob killed a Sri Lankan citizen, accused of a blasphemous act) and now this news of horrific violence in which a man is lynched while police officers watch as spectators", said Allama Muhammad Ahsan Siddiqui, Muslim leader and chairman of the Interfaith Commission for Peace and Harmony (ICPH), in a message sent to Fides. On the evening of February 12, in Mian Channu, Khanewal district, in the Pakistani province of Punjab, a mob tortured and killed a mentally ill Muslim man accused of burning pages of the Holy Quran. The crowd did not listen to the Muslim man, accused of blasphemy, who professed his innocence. They tied him up and tortured him to death, stoned him and then hung him. Allama Siddiqui said, "The Pakistani government must support awareness programs to change these norms and strengthen attitudes that promote coexistence. There should be a quick punishment for mob violence. The government must guarantee the rule of right. It is its responsibility to ensure that such incidents do not occur. We want a peaceful Pakistan". Prime Minister Imran Khan has ordered strict action to be taken against the mob that lynched the innocent man. Ashiknaz Khokhar, human rights activist in the province of Punjab, told Agenzia Fides: "These incidents are damaging the image of Pakistan in the world. The state must take strict measures against the culprits. Mass violence must be addressed and treated seriously in order to protect innocent people". The President of the Peace Committee for Human Rights of Sahiwal, Sohail Shaukat, speaking to Agenzia Fides, says: "Nobody has the right to take justice into their own hands. above the law. In cases of blasphemy, people become violent and aggressive, even abandoning the teachings of Islam". Joseph Jansen, president of the NGO "The Voice for Justice", calls for broader political and social analysis and change: "In the short term, there is an urgent need to arrest the perpetrators; but, on the other hand , it is necessary to analyze and evaluate why a mob of citizens feels entitled to take justice into its own hands and kill innocent people. Cultural and political reflection and change are necessary". (AG-PA) (Agenzia Fides, 14/2/2022)