AFRICA/ALGERIA - The new Archbishop Jean-Paul Vesco takes office in Algiers: "our Blessed are light on our path" 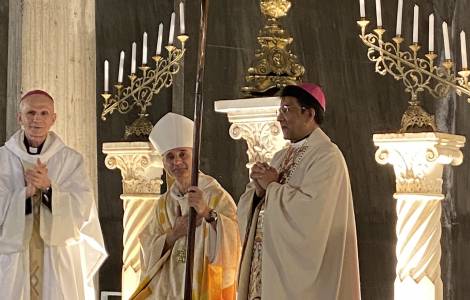 Algiers (Agenzia Fides) - An Algerian Church "allied without repentance", which shares all the joys and sorrows of the Algerian people without claiming privileges, and wants to imitate the "discretion" of Jesus at the wedding in Cana, not by calculation or obligation, but because it recognizes that the proclamation of the Gospel and the apostolic confession of faith are essentially foreign to the paths of proselytism. Such is the face of the Algerian Catholic community, as evidenced by the words and moments that marked the installation ceremony of the new Archbishop of Algiers, Jean-Paul Vesco, on Friday February 11, the liturgical feast of Our Lady of Lourdes.
The solemn Eucharistic liturgy, presided over by the Archbishop, brought together hundreds of people, in a packed cathedral the likes of which had not been seen for a long time. The celebration was accompanied by the singing of a choir made up of more than 120 members, mostly young people from sub-Saharan African countries, who emigrated to Algeria to study or seek work, and who represent an important part of the diversity of the Algerian Catholic community. In some of the speeches given at the end of the celebration - reports one of those present to Agenzia Fides - Algerian Catholics expressed with emotion their welcome to the new Archbishop, presenting themselves as a small community that perceives with emotion and lives with gratitude its membership in the universal Church. Mgr Kurian Mathew Vayalunkal, Apostolic Nuncio in Algeria, as well as the Catholic Bishops of the country, starting with the Bishop Emeritus of Algiers, the Jesuit Paul Desfarges participated in the Eucharistic concelebration. Representatives of local authorities and the Ministry of Religious Affairs, as well as representatives of local Islamic communities were also present at the ceremony.

In his homily, Archbishop Vesco offered evocative ideas inspired by the Gospel episode of the Wedding at Cana, read during the Liturgy of the Word. The Archbishop began by saying that the Catholic Church and the Algerian people are in a way “a marriage, an alliance”. Our Church, since the independence of Algeria, is placed under the sign of the alliance with this country and its inhabitants, an alliance without repentance. It is a covenant whose sign is the life of the nineteen priests, monks and nuns, consecrated men and women who died as martyrs during the dark decade of Algeria, and whose beatification, celebrated on December 8 in Oran, represents "a light on our path". We share the joy and the sorrows of the citizens of this country, and we want to be a fully citizen Church which does not claim any right except that of being able to exercise its duties and its responsibility as a citizen. It is the particular color of the evangelical witness of our Church. It is a unique color that also espouses the discretion used by Jesus himself at the wedding at Cana, when, as a guest, he does not take center stage and delicately performs a miracle "which already announces, through this water transformed into wine, the gift of one's own blood for the Salvation of the world as we will remember during the Eucharist". Nobody - Archbishop Jean-Paul noted in his homily, knows of the existence of this gesture which rejoices the hearts of all and saves the honor of the groom, except of course the employees who serve the table. Our Church in Algeria also wants to be discreet, not by calculation or by strategy, nor even by obligation. She wants to be discreet, not in the sense of being erased, timorous, fearful. She wants to be discreet in the sense that we say of a person who respects the privacy and the faith of others that she is discreet. This is the reason why our Church, in its essence, is not and cannot be a proselytizer. In the conviviality at the wedding in Cana, added the new Archbishop of Algiers, we can also hear "joviality", which sounds like joy, like happiness to be together, not only as a duty to be together. The gospel of the wedding at Cana invites us to this joy of the wedding, and it will undoubtedly happen one time or another that we transform water into good Algerian wine!

Jean-Paul Vesco, appointed Archbishop of Algiers by Pope Francis on December 27, 2021, was until then Bishop of Oran. Born in Lyon in 1962, he began his career as a lawyer, before feeling the vocation that would lead him to join the Order of Saint Dominic, the same to which Pierre Claverie belonged, the Bishop of Oran assassinated two months later the monks of Tibhirine. When the Dominican Fathers expressed their intention to strengthen their presence in Algeria, Father Vasco offered his availability and was sent to Tlemcen, 150 kilometers from Oran, with an older brother. Pope Benedict XVI appointed Jean-Paul Vesco as head of the diocese of Oran on December 10, 2010, on the occasion of the anniversary of the death of Charles de Foucauld, the "universal brother" who for decades inspired the pastoral care of the Churches of the Maghreb and who will be proclaimed a saint in May. During his episcopal ministry in this city, Bishop Jean-Paul also contributed to developing activities and initiatives at the service of Algerian society as a whole: a library for students, craft workshops, support for people in economic and health difficulties. As bishop of Oran, he also participated in the 2015 synod dedicated to the family. In 2018 he concelebrated the beatification ceremony in Oran of the 19 Catholic martyrs killed in Algeria between 1994 and 1996. (GV) (Agenzia Fides, 12/2/2022)