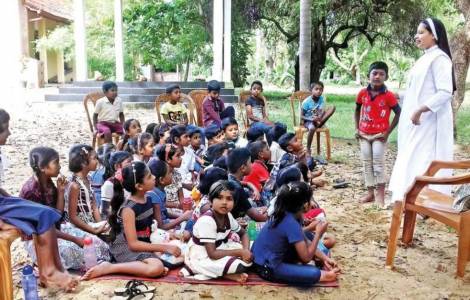 2022-04-07
The National Director of the PMS: "Sri Lanka needs justice and transparency"

Colombo (Agenzia Fides) - For a century, the Sisters of the Apostolic Carmel have been working for the proclamation of the Gospel and for the missio ad gentes, offering quality education and committing themselves to the social promotion of women and girls: the congregation of religious celebrates 100 years of pastoral service in Sri Lanka in February 2022.
"One hundred years ago the Catholic Church of Sri Lanka invited the Sisters of India asking them for a contribution in educational pastoral care, to educate and empower women", says to Fides Sister Lydia Fernandes, Superior of St. Agnes College in Mangalore, in the Indian state of Karnataka. The first group of nuns went to Colombo, the capital of Sri Lanka, from Mangalore, a coastal city in the Indian state of Karnataka. Over time, the congregation has become one of the most flourishing and widespread realities of missionary apostolate in the country, dedicating itself in particular to girls from all sectors of society. "We are happy to have completed 100 years of service in Sri Lanka. We thank all the people, in particular the Bishops, priests, nuns and lay people who have helped and supported us in this great mission", says Sister Fernandes. That in Sri Lanka (at the time Ceylon) was one of the first missions abroad undertaken by the congregation of the nuns of the Apostolic Carmel. The nun recalls one of the pioneers, Sister Veronica of St. Joseph of the Apparition who began an exploratory journey to Sri Lanka from India in 1872. At the invitation of Msgr. Gaston Robichez SJ, Bishop of Trincomalee in Sri Lanka, a group of three nuns arrived on the island on February 2, 1922, establishing a first, small community. After their arrival, they began to take care of the schools, houses and orphanages of the Cluny nuns, who could not then continue their work in Sri Lanka. The nuns also opened their second convent on May 8, 1922 in Batticaloa.
Over the decades, the sisters have opened homes or work in educational facilities such as St. Mary's College in Trincomalee, St. Cecilia's College in Batticaloa, St. Anthony's Vidyalaya in Dematagoda, Carmel Central College in Chilaw, All Saints College in Colombo, and other locations such as Jaffna. Currently, about 250 Sisters of the Apostolic Carmel work in 36 convents scattered across the territory of Sri Lanka, with adjoining educational facilities for girls, many well organized and appreciated.
"We are proud to be able to render our service to thousands of people in Sri Lanka, especially young students, orphans, poor tea plantation workers, prisoners and the elderly", points out Sister Fernandes.
Their presence did not remain only on the island, they soon turned their attention to the "missio ad gentes": thus a new mission sprang from the mission in Sri Lanka, when the nuns began a missionary work in Pakistan, starting from 1981. Currently they are present in Pakistan in four convents in Lahore, Faisalabad and Issanagri (Karachi), where they run a school.
In terms of global presence, the sisters of the Apostolic Carmel operate in eight other countries: Kuwait, Pakistan, Kenya, Tanzania, Uganda in East Africa, Italy, Bahrain and Pau, France, where the congregation was born, in 1868.
An English woman, Sophie Leeves, later known as Sister Veronica of Saint Joseph of the Apparition, started a community in 1870 in Mangalore with some nuns. Since then, the congregation of the Sisters of the Apostolic Carmel has been based in Mangalore. (SD-PA) (Agenzia Fides, 10/2/2022)