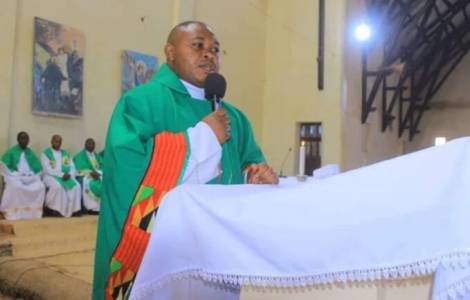 Kinshasa (Agenzia Fides) - The funeral of Fr. Richard Masivi Kasereka, a Congolese religious of the Order of the Clerics Regular Minor (Adorno Fathers), assassinated on February 2 in a town in the east of the Democratic Republic of the Congo, was held this morning, February 5, February, at 10 am local time. This was communicated to Fides by the General Curia of the Order, which affirms that for the moment no further details are known about the murder of their confrere apart from those revealed in a note by the Diocese of Butembo-Beni.
"It is with great sadness that our diocese announces the sudden death of Fr. Richard Masivi Kasereka, a member of the Order of the Clerics Regular Minor and parish priest of the parish of St. Michael the Archangel of Kaseghe", says the note sent to Fides, signed by His Exc. Mgr. Melchisédec Sikuli Paluku, Bishop of Butembo-Beni. "According to initial information, Fr. Richard Masivi Kasereka was assassinated on February 2 by armed men in Vusesa, between Kirumba and Mighobwe, in the territory of Lubero (North Kivu), as he was returning to his parish, after having celebrated the World Day of Consecrated Life, in Kanyaboyonga". "While awaiting the results of the ongoing investigations, the Diocese of Butembo-Beni expresses its condolences to the priests, the consecrated and the lay faithful of Butembo-Beni", says Bishop Sikuli Paluku, who has extended a thought of special concern to the religious and biological families of Fr. Richard. The superior of the African delegation of the Order of the Clerics Regular Minor, Fr. Jean-Claude Musubao, expressed his condolences in a message in which he remembers that Fr. Richard was "snatched from life three days before his 35th birthday", and that the religious was in charge of the Kaseghe parish only since October 31, 2021. "We ask the civil authorities to clarify this murder and to guarantee the safety of peaceful citizens exposed to multiple attacks throughout the Republic, and in particular of consecrated persons who have dedicated their lives to the service of the people of God", asks the Conference of Major Superiors of the DRC (COSUMA), which brings together the male and female religious congregations present in the country.
The eastern provinces of the DRC, especially North Kivu and neighboring Ituri, have lived for decades in a state of permanent insecurity due to the presence of various armed groups. On February 1, a local militia killed 62 people in an IDP camp in Ituri. (L.M.) (Agenzia Fides, 5/2/2022)