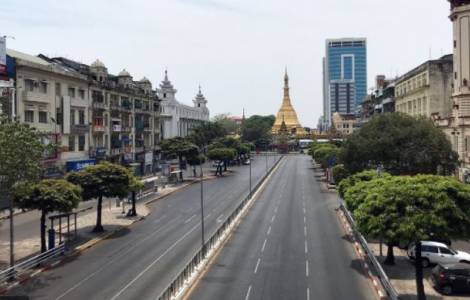 Yangon (Agenzia Fides) - The Catholic faithful of Burma thank Pope Francis who, today, February 2, after the General Audience, said: "For a year now, we have been watching the violence in Myanmar with sorrow. I echo the appeal of the Burmese bishops for the international community to work for reconciliation between the parties concerned. We cannot look away from the suffering of so many brothers and sisters. Let us ask God in prayer for consolation for this tormented population. To him we entrust our efforts for peace".
The faithful joined the special protest yesterday, February 1: Yangon, Mandalay and other Burmese cities were empty and silent yesterday. The people of Myanmar wanted to mark the first anniversary of Myanmar's military coup on February 1, 2020 with a massive "silent strike". Yesterday, a large peaceful protest, coordinated for months at the national level, called on citizens across the country to close their businesses and stay at home. The effect was to see deserted cities, with no traffic, no people on the streets. As Fides has learned, the "silent strike" was organized from 8 a.m. to 4 p.m. and comes at a time when violence is increasing in the region. Last week, the government issued official warnings in state media that "anyone participating in the strike could be prosecuted, including under the Anti-Terrorism Act, with a maximum sentence of life imprisonment and possible confiscation of property". Ignoring the threats, thousands of entrepreneurs, small traders and workers announced they would not open their businesses, "preferring to be arrested", reported the state newspaper "Myanmar Alinn Daily". The Myanmar army fears these silent strikes and threatens shopkeepers with confiscating their licenses, but even the few who open their doors have no customers.
In Yangon, the country's largest city, the usually bustling streets were deserted. Markets and squares, usually crowded, were empty before the official start of the strike: "This - notes a local source of Fides - shows the broad popular opposition to the military government and its contempt for human rights". Catholic priest Father David Hmung comments to Fides: "This non-violent demonstration against the military coup in Myanmar reminds us that the Catholic Church is always on the side of the citizens, the poor, the most vulnerable and rejects violent acts and barbaric acts committed by the Myanmar military against unarmed civilians, who have been arrested or killed while their property is seized or burned". And he continues: "By showing unity and resilience, the strike testifies that citizens conduct a non-violent psychological resistance against the military dictatorship".
Among the small traders in Yangon, some have suffered confiscations and violence at the hands of the military. The government implemented other measures to try to make the strike fail. In Yangon and Mandalay, city administrators have scheduled special events such as a bicycle race, to try to attract crowds. A number of pro-military demonstrations also took place, organized by the authorities. (JZ-PA) (Agenzia Fides, 2/2/2022)