AFRICA/ETHIOPIA - Food, not weapons. Humiliation and trauma: the greatest tragedy of the witnesses of massacres in Tigray 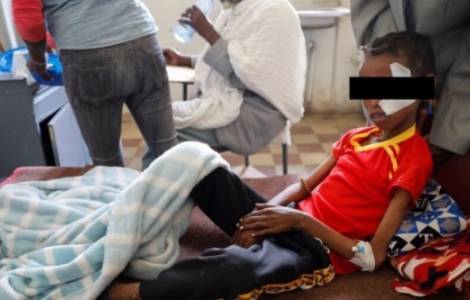 Adigrat (Agenzia Fides) - "Since the beginning of the conflict in the Ethiopian region of Tigray, nothing is known about some parishes of the Eparchy of Adigrat. We know that foreign soldiers attacked several of them. People must listen to the cries of the affected population. The Bishop of the Eparchy of Adigrat is crying, people are traumatized. Let them have food. Not weapons. Why is the world so silent? Why, in this world of great abundance, are people dying of hunger? The food is there but it is blocked. For what reason? Everyone must know that Tigray is in shock, children are dying and the world is watching". Many questions in search of answers were asked by direct witnesses who spoke to Agenzia Fides about the humanitarian crisis in the country. "People are being destroyed because of war. Not only in Tigray, but also in other parts of Ethiopia. Tigrayans thank Catholic Church missionaries who speak of their crisis while very little is known about other regions. The region is literally destroyed, infrastructure, schools, churches, monasteries, mosques, some cemeteries, part of the cultural heritage. At present, 90% of the sanitary facilities have been destroyed. Since the beginning of the conflict, no one has received a salary in Tigray. All those who worked for the government no longer have a salary. Paradoxically, in the villages, we can fetch wood in the forest, water in the rivers. But in the cities, you have to buy everything, pay the rent, feed your family. What do you do after a year and a half without income? Humanitarian aid would be ready but the ongoing conflict does not allow it. They have thrown people into panic". This is how the testimonies given to Agenzia Fides by eyewitnesses to the Tigrinya conflict continue. At the moment, therefore, the most important thing is the opening of humanitarian corridors to help the civilian population. The total blockade is killing a lot of innocent people. There is talk of thousands of children, in particular, who are dying of malnutrition". "At some point, this war will have to end and the hardest part will be the recovery of human beings, of thousands of young people without a future. The impact of this war is too great and the problem will continue over the years. According to experts they will be affected for two or three generations because the traumas are too deep. For society to return to normal, it is urgent and necessary to act now, not to wait and be ready once the war over", the source concluded. A strategic plan must be developed to help the traumatized society. It is necessary but, at the same time, life-saving interventions are required immediately". (GF/AP) (Agenzia Fides, 1/2/2022)