AMERICA/BOLIVIA - Young catechists from Cochabamba ready for the mission 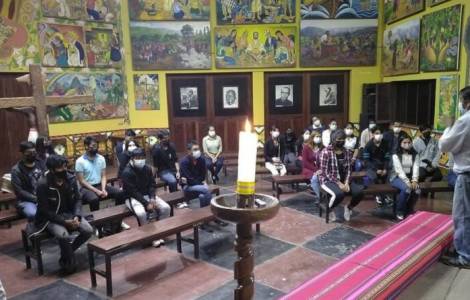 Cochabamba (Agenzia Fides) - 34 young people from different parishes of the Archdiocese of Cochabamba have completed their formation phase, in the Casa del Catechista CADECA, to begin their service as catechists in their respective parish communities, divided into two groups: from 10 to January 15 the vicariates of Valle Bajo and Sacaba and from January 17 to 22 the vicariate of Valle Alto.
As the Bishops' Conference informs in the note sent to Fides, many of these young people began their formation in January 2020, which then continued virtually due to the health measures resulting from the pandemic, as well as with teaching aids provided during the year 2021. The formation was completed with community life, prayer, spirituality and work. At the end, the 34 young people received the catechist diploma, the Bible, the Rosary and other useful materials for their mission of evangelization which they will carry out in the various parishes. The Archdiocese has a population of 1,971,253 inhabitants, of whom 1,616,650 are Catholics, grouped in 74 parishes. The CADECA community thanked the participants for their commitment and dedication, such as the parish priests, religious, catechesis leaders, seminarians, parents, who presented the study topics. Since 1984 the Casa del Catechista CADECA has carried out its formation service for catechists and pastoral leaders of the Archdiocese of Cochabamba and throughout the country. Its team of formators travels to parishes and communities, has also set up communication workshops for catechists and participates in formation programs in the radios stations that exist in parishes, especially in the rural areas.
On the last National Day of the Catechist, celebrated in Bolivia on August 22, Archbishop Ricardo Centellas, Archbishop of Sucre and President of the Bolivian Episcopal Conference, thanked the catechists for the unstoppable work they carry out, even more so in this time of pandemic. "My congratulations to all the catechists in Bolivia - said the Archbishop -. Without the generous and selfless work of the catechists, our faith would be much weaker. In this time of pandemic they have managed to continue their path of formation to faith, they set up digital platforms, they communicated through Whatsapp. I believe that all the digital culture, which is in the hands of young people, has been fundamental in maintaining catechesis. My congratulations and my deep gratitude to all the catechists". (SL) (Agenzia Fides, 28/1/2022)

AMERICA/PERU - The "Day of the Catechist": disciple-missionary called to live synodality

AMERICA/PERU - "Catechists of the 21st century": launch of an online training