OCEANIA/TONGA - Clouds of ash, lack of electricity and psychological trauma: the response of the Church 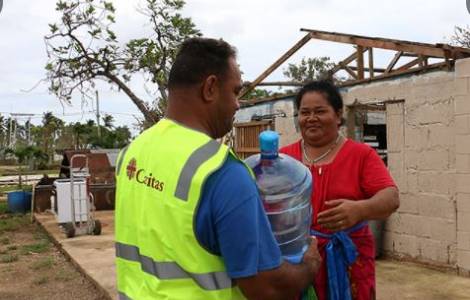 2022-01-27
Clouds of ash, lack of electricity and psychological trauma: the response of the Church

Tonga (Agenzia Fides) - "There are ashes everywhere. Electricity is not stable. There is still no phone service for the more distant islands. There is no Internet connection. One of the main problems is the lack of water: people drink bottled water from stores, but there is not enough to last a long time and meet everyone's needs": this is what Caritas Tonga communicates to the Caritas network in Oceania and Asia Pacific that are organizing to monitor the situation and send the first humanitarian aid, after the eruption of the underwater volcano Hunga Tonga-Hunga Ha'apai, on January 15, and the subsequent tsunami. The catastrophe has affected 84% of the approximately 105,000 people living in the kingdom of Tonga, making the supply of food and water to the population problematic.
Caritas Tonga, and the entire local Church, have fully mobilized to provide relief, aid and assistance to the affected populations. As Fides has learned, Cardinal Soane Patita Paini Mafi, Bishop of Tonga, has sent a letter to all parishes asking for donations of food and other material, to be sent above all to the Ha'apai Islands, especially to the displaced people who have been transferred to other places. The Church has created a special, "Diocesan Disaster Team" made up of at least one representative from each area or vicariate, which will meet regularly to monitor the situation and needs on the various islands.
People evacuated from the Mango and Atata islands to Tongatapu are being temporarily housed in Sopu in the Nuku'alofa area. The Church points out "a clear need for psychosocial support for these groups in particular". Although the government is expected to organize such support, Caritas Tonga workers and volunteers are attentive to the aspects of psychological trauma that accompany disasters and emergencies of this type, and are prepared to monitor the situation and intervene in this area as well. In the 2020 World Risk Index ranking, the archipelago of Tonga (173 between islands and islets), is the second country in the world most exposed to the risk of catastrophes caused by climate change, after Vanuatu, another archipelago in the Pacific Ocean. Last November, Cardinal Mafi, bishop of Tonga and Niue, who is also president of Caritas Oceania, raised the alarm at the UN Climate Conference held in Glasgow (COP26), warning of the frequency from storms, cyclones, floods and coastal erosion, noting that "his land is no longer safe for future generations".
The diocese of Tonga, which encompasses the entire kingdom of Tonga and the island state of Niue, has a population of about 15,000 Catholics (out of 105,000 inhabitants), with 43 priests, two brothers and 34 nuns, divided into 15 parishes. (PA) (Agenzia Fides, 27/1/2022)