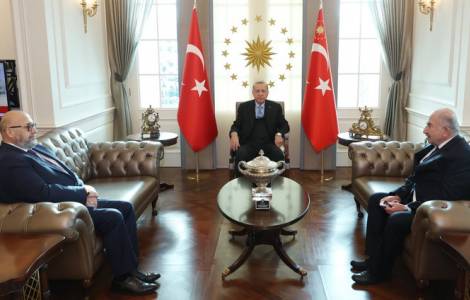 Ankara (Agenzia Fides) - The process for the publication of the new rules on the functioning of the Turkish Foundations linked to non-Muslim communities is almost complete, which will soon allow these organizations to renew their governing bodies after eight years of institutional stagnation. The "restart" of the Foundations was announced by Turkish President Recep Tayyip Erdogan himself during his meeting on Tuesday, January 25, with Bedros Şirinoğlu, President of the Yedikule Surp Pırgic Hospital Foundation and the Association of Armenian Foundations.
Erdogan received Şirinoğlu in Ankara, at the Çankaya Palace.
During the meeting, which lasted 45 minutes, the Turkish President gave guarantees about the imminent publication of the new statutes of the Foundations, which will also define the renewal procedures of the respective boards of directors. Şirinoğlu, in several statements released to the Turkish media, even predicted that it would be necessary to wait between 3 and 4 months at most before seeing the new regulations published and thus being able to start the electoral procedures for the renewal of managerial positions. "During the meeting", added the President of the Armenian Foundations, interviewed by the Armenian-Turkish newspaper Agos "I declared that it is necessary to have a diversified regulation for each minority community, and President Erdogan replied that they will work on this issue". In Turkey, the management of minority foundations closely affects the life of local Christian communities, starting with the Armenian community. In fact, these bodies are entrusted with the management of places of worship, real estate and public institutions linked to the various non-Muslim communities, including Jews. In early December 2021, Burhan Ersoy, Director General of the Foundations, confirmed that the process of developing a new regulation, especially regarding the elections for the positions of the Foundations, had reached a good stage, reiterating that the draft text had been prepared taking into account the requests and proposals of the various minority communities. The previous electoral regulations for the senior management of the Foundations, as already reported by Fides (see Fides, 7/12/2021), had been suspended in 2013, after the Government promised to establish new procedures and justified the measure with the declared intention of making the management of real estate entrusted to these bodies more functional and transparent.
The legal status of the Foundations is still based on the Peace Treaty of Lausanne, signed in 1923 by Turkey and the victorious powers of the Entente (British Empire, France and Russian Empire). The treaty guaranteed non-Muslim confessional communities in Turkey equality before the law and the freedom to promote and manage "religious and social institutions". Over the past two decades, Turkey has addressed and resolved many of the disputes related to the management and fate of state-seized assets over which the foundations claimed rights guaranteed by the Treaty of Lausanne. According to official data provided by the Turkish apparatus, between 2013 and 2018 some 1,084 properties were returned to foundations linked to non-Muslim communities, and 20 places of worship were handed over to the same communities after the necessary restorations. In the past, since 1936, legislative provisions had opened the possibility for non-Muslim community foundations to acquire new properties. Then, in 1974, this guarantee was canceled and the State had begun to massively seize the assets acquired by non-Muslim community foundations since 1936. After the year 2000, the new provisions issued in accordance with Turkey's harmonization packages for accession to the European Union facilitated the return to the Foundations of assets previously seized by the State. At the General Assembly of Turkish Foundations, the representative of non-Muslim foundations speaks on behalf of the network of 167 non-Muslim community foundations in Turkey. 19 are the "minority" foundations linked to the Jewish community, while the others are linked to various Christian communities. The Greek Orthodox community has 77 Foundations, while the Armenian has 54. Meanwhile, on the night of Wednesday, January 26, President Erdogan himself announced in a televised speech that Israeli President Isaac Herzog will pay an official visit to Turkey next month, adding that "this visit may open a new chapter in the relations between Turkey and Israel". (GV) (Agenzia Fides, 27/1/2022)