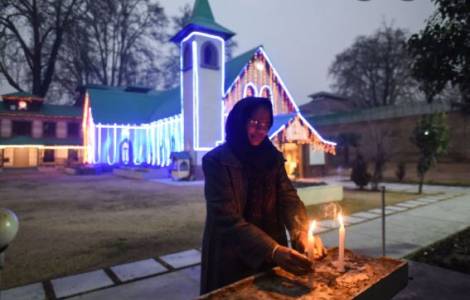 New Delhi (Agenzia Fides) - "Indian Christians are committed to updating the spirit and letter of our Constitution, so that justice, freedom, equality, diversity and fraternity may be a reality for all. Above all, to ensure that truth triumphs", Father Cedric Prakash, Jesuit and writer, promoter of human rights explains to Fides, recalling that, for Indian Christians, the 73rd Republic Day, celebrated yesterday, January 26, was marked by disturbing questions about the future. The leaders of the Churches took the opportunity to express an opinion on the future prospects of the Republic.
Father Francis Arackal, a Dominican and professor of journalism and media, states that "India is facing serious social, economic and political problems under the current federal government led by Prime Minister Narendra Modi". And he adds: "Religion-based polarization is spreading across the nation, as in recent years more and more people have become poorer and lost their jobs due to the Covid-19 pandemic. In addition, the attacks on Muslims and Christians in India do not stop". Reverand Asir Ebenezer, Protestant Christian leader, Secretary General of the National Council of Churches in India (NCCI), an ecumenical body says: "The unequal distribution of wealth; differentiated access to rights and privileges; the abuse of the dignity of life, culture and heritage of religious minorities, socially disadvantaged ethnic communities continue to mark the destiny of Christians in the country. This awareness leads us to unite to face what awaits us and reach it together".
The Gospel, he continues, teaches Christians "to shape their lives and their environment according to the needs of the least and marginalized". "The Gospel - he notes - also asks us to relate with all who have a similar orientation, regardless of faith or culture. There are academics, economists, civil servants, politicians and citizens of all faiths who share and act according to these lines of thought. It is therefore necessary to cultivate this ethic among all citizens, defending them from those who promote the prosperity of a few and the exclusion of many". The Christian leader points out: "The time has come to focus our civil and political rights so that privileges of a small group are not asserted". Christians are called to once again renew their commitment to discern, inform and be inspired by the Gospel so that their good works, together with those of all other individuals and groups of good will, may be a light for the nation", Ebenezer concludes.
According to the 2011 national census, of the 1.3 billion people in India, there are 966 million Hindus, or 80%. In addition to 172 million Muslims (14%) and 29 million Christians (2.3%). (SD-PA) (Agenzia Fides, 27/1/2022)