AFRICA/CENTRAL AFRICA - Poverty, disorganization and music: the mission among the Pygmies is beautiful and full of stimuli 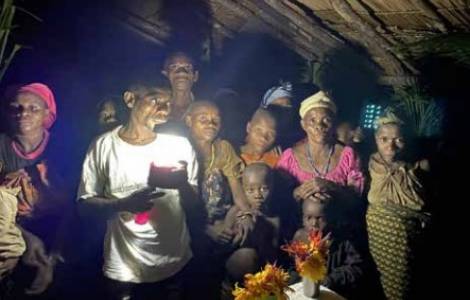 Monassao (Agenzia Fides) - "The work of the missionaries here does not consist only in pastoral care strictly understood, such as catechesis and liturgy, but also in helping people to stand up, to invest in the future", writes Father Davide Camorani, priest of the Society for the African Missions (SMA) who arrived in the Central African Republic on September 21, 2021 (see Fides, 17/10/2021).
"I have been in Monassao for about two months, a village in the south of the Central African Republic, in a territory inhabited by the Bayaka, commonly known as Pygmies. If I had to express my first impressions in a few words I would say: poverty, disorganization and music - says the missionary who started, together with his confrere Fr. Michele Farina, the first Italian SMA mission in the country (see Fides, 3/8/2021 ). The poverty here is evident, not only on an economic level, but also on a human level. There is a great lack of education, they live isolated from 'modernity', with a mentality born from millennia of nomadism and survival economy that makes this people inadequate for an organized society. The habit, perpetrated for centuries, of living from day to day makes it difficult for them to look long term, to plan, to save, to plan.
Hence also their disorganization, their difficulty in completing a project". The missionaries have focused primarily on schools and health promotion. They have encouraged families to take their children to school by offering a meal to all children at the end of classes. They offer basic care at the mission dispensary, trying to pass on the good habit of monitoring one's health, contacting the clinic before the illness becomes too serious, constantly following the prescribed treatments, the vaccination plan, etc. "The Monassao dispensary is an important work that offers a serious and qualified service taking into account the country's standards", explains Fr. Camorani who, before joining the SMA, had a nursing degree and had served for 20 years at the hospital in Faenza.
The management of this dispensary is my first commitment, especially from an organizational point of view, from the management of personnel to the supply of medicines. It is a job that I love and that occupies a good part of my days".
"The Bayaka - concludes Fr. David - are a festive people and very gifted for music; they love to sing and they do it pretty well. The village where I celebrated mass on Christmas Eve 2021 is lost in the forest, the church is a shed made of reed, but the community is lively. The celebration was well organized and the songs beautiful and well prepared.
After mass, we all gathered around the fire to celebrate. The mission among the pygmies is beautiful and full of stimuli; there is so much to do, and they are a friendly and welcoming people; Sometimes it is a bit like having children in front of you but, after all, aren't they the first to enter the Kingdom of Heaven?" (MP/AP) (Agenzia Fides, 27/1/2022)