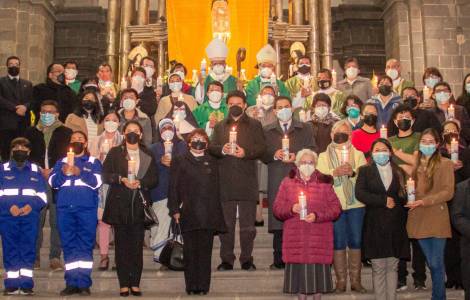 2022-04-04
The right to protest is legitimate, but violence must be condemned

Cusco (Agenzia Fides) - On January 23, Sunday of the Word of God, Msgr. Richard Daniel Alarcón, Metropolitan Archbishop of Cusco, officially opened the "Missionary Year of Social Commitment" in the Archdiocese. In his homily, Bishop Daniel called for three fundamental attitudes for this year: "eyes to see, ears to listen and hands to act". And he explained: eyes to see the reality that surrounds us and where the suffering faces of Christ are; ears to hear the cries of our people who seek justice, attention, understanding, inclusion, and hands to act, to respond to these cries, not only of society, but also of the earth that today cries out to be cared for, saved and protected.
According to information sent to Fides by the Bishops' Conference, the Mass was concelebrated by Msgr. Lizardo Estrada Herrera OSA, Auxiliary Bishop of Cusco and also by Victor Boluarte Medina, Mayor of the Provincial Municipality, and William Peña Farfán, Mayor of the District of Wanchaq .
The Archbishop stressed during the celebration that social pastoral care cannot just be fine words and beautiful desires, but has to be concretized in actions that can be seen, touched and felt. That is why the hands of the social pastoral care are the parish Caritas, where all Christians who are members of their communities will respond to this reality that challenges them and demands a response. The objective of this Missionary Year, the Archbishop said again, is to start a parish Caritas in each parish community of the Archdiocese, which can develop a social pastoral service at the service of the poorest, the most excluded from the community. At the end of the Eucharist, the Archbishop and the Auxiliary Bishop presented a lighted candle to all the representatives of the different commissions of the Archdiocese, as well as to the authorities present, to share the light of Christ with everyone and multiply the social commitment. The Cusco (or Cuzco) region is situated on the western side of the eastern Peruvian mountain range. Its capital is the city with the same name. The archdiocese, founded on September 5, 1536, has an area of 23,807 square kilometers, a population of 2,277,480 inhabitants, of whom 2,011,970 are Catholic. It has 85 parishes and manages 35 charitable and assistance structures. (SL) (Agenzia Fides, 27/1/2022)