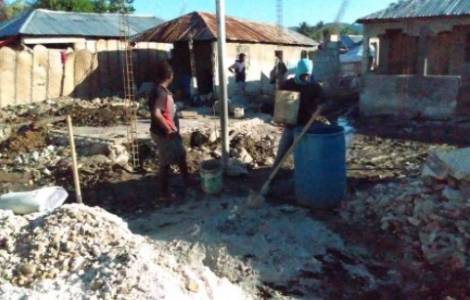 2021-12-11
"Believing in life and becoming multipliers of goodness and hope", the Camillians strengthen their missionary commitment

Jeremie (Agenzia Fides) - A few days after the anniversary of the earthquake that struck Haiti in 2010 (see Fides, 13/1/2010), causing more than 250,000 victims and one and a half million homeless, on January 24, 2022 a series of earthquakes hit the southwest of the island causing deaths as well as dozens of injuries and damaged buildings.
"Despite the many difficulties, we have never ceased our commitment to give concrete answers to the poor people of Haiti who, once again, have been hard hit and tried", writes to Fides Father Antonio Menegon, Camillian missionary (MI).
"On the island - continues the priest, who is also president of the non-profit organization Madian Orizzonti dei MI, in the areas affected by the earthquake, the construction of the second school and the completion of the first 10 houses is about to begin". In the areas destroyed by the earthquake last August (see Fides, 25/8/2021) reconstruction works are in full swing. The massive earthquake killed more than 2,200 people and destroyed, or severely damaged, more than 130,000 homes in a nation still recovering from the devastating 2010 earthquake. "The first school to be rebuilt - says Father Menegon - was that of Camp Perrin (see Fides, 28/10/2021), 5 houses have already been completed and are currently inhabited. Another 5 are in an advanced state of construction and the families they are intended for by the end of January are eager to enter".
The priest also explains that during the first week of February, the construction of a new small school will begin in Vieux Bourg d'Aquin, "a small village located about forty kilometers from Aquin, which was very badly affected by the earthquake. The parish priest of this small village spoke of some 200 children, although we think the number is certainly higher, who do not have the opportunity to attend a school. The hope is to build 4 more classrooms, equipped with the desks we have already received, blackboards, desks and chairs, as well as adequate sanitary facilities". (AM/AP) (Agenzia Fides, 26/1/2022)