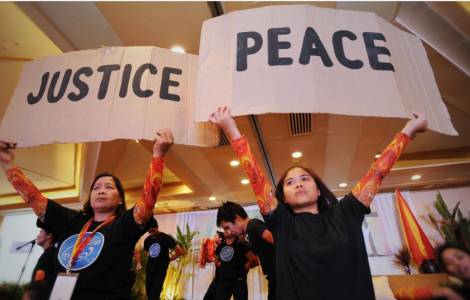 Manila (Agenzia Fides) - "Our prophetic voice and firm stand for Christ-like conduct will enable us to join with other Filipinos in discerning who should lead the country. We must all take courage to work together, honoring life and God’s creation. Among the candidates it is necessary to choose leaders at the service of life and of the nation". This is what the Bishops' Conference of the Philippines (CBCP) and the National Council of Churches in the Philippines (NCCP) wrote in a joint message issued on the occasion of the Week for Christian Unity (January, 18-25), which brings together the Protestant churches.
In view of the political elections to be held in May 2022, the leaders of the country's Christian Churches invite voters to "follow the light of Christ" (an expression that gives the title of the message), "guarding against the powers of darkness that will "seek to defraud, deceive, and destroy God’s intended goodness" for the Filipino people.
Denouncing the widespread killings in the so-called "war on drugs", launched in recent years by Rodrigo Duterte's government, the document notes that "the very dignity of life has been violated, as many have been extra-judicially killed. Falsehoods and evil peddled through strong-arm governance have not only limited democratic space, but they have led to corruption, scandals and serious shortcomings in social, health, education and other government services".
In the statement, signed by the Secretary General of the NCCP, Vscovo Reuel Norman Marigza of the "United Church of Christ" and by Catholic Archbishop Angelito Lampon, at the head of the dioceses of Cotabato, it is noted: "As a community that evangelizes through active participation in the democratic process, we can lead by example, reflecting Christ’s love and joining in a journey toward our desired future, where justice, righteousness, and peace will take root and God’s Shalom will flourish among us".
Recalling the difficulties and desperation of the people affected by Typhoon Rai and Covid-19, Christian leaders then invite the faithful to "unite in solidarity with the most vulnerable", generously dispensing aid, and "to place themselves at the service of the poor, marginalized, fighting for a more prosperous and peaceful future". (PA) (Agenzia Fides, 25/1/2022)

AFRICA/NIGERIA - The Christian denominations of Kaduna: "No to the hypothesis of hiring foreign mercenaries to fight against terrorists"