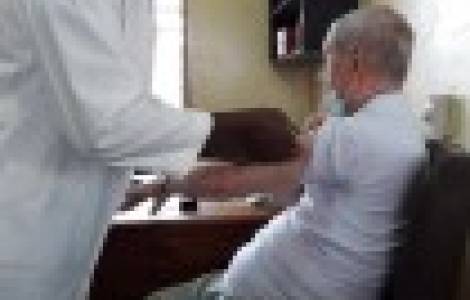 2022-01-15
"Equalization and the health of the priest": General Assembly of the Fraternity of Diocesan Priests of Togo

2021-12-22
The true meaning of Christmas in caring for others: the missionaries never stop

Lomé (Agenzia Fides) - "Having left Kolowaré on December 30 last year, I am now in Lomé in the Propaedeutics Seminary, the preparatory year for entering the Society of the African Missions before beginning the three-year philosophical cycle", says Father Silvanno Galli, SMA missionary, who has been living and working as a missionary in Togo for more than 10 years, to Agenzia Fides, with regards to the beginning of his new adventure in the capital (see Fides, 22/12/2021).
"Here in the south, I am immersed in an urban environment with many opportunities that did not exist in the rural world of Kolowaré", he underlines. "We are guests in the old Regional House, consisting of two large buildings, completely renovated to accommodate young people. The Superior of the Seminary is Father Walter, who has a degree in psychology, while the young people all have university degrees. I accompany them". The missionary also reports on recreational opportunities, "unlike in Kolowaré, there are many opportunities here in the south. Next to our house there is a football field where our students play football twice a week. We recently went to meet two writers and collectors of Togolese stories and tales at the Goethe Institute in Lome. Also, and this is very important, we went to one of our dispensaries where we received the third dose of the Covid-19 vaccine". As of December 30, 2021, more than a thousand Togolese have received the booster dose, according to the weekly Jeune Afrique. The vaccination campaign, which began on March 10, has spread rapidly in the country, requiring proof of vaccination to enter public buildings and places of worship. This measure, which has been called for by civil society organizations, religious leaders and politicians, remains in force and should be extended to other public places given the recent surge in cases over the Christmas holiday period. As of January 4, 2022, there were 376 people infected, bringing the total to over 32,000, while 251 died related to Covid-19. (SG/AP) (Agenzia Fides, 24/1/2022)