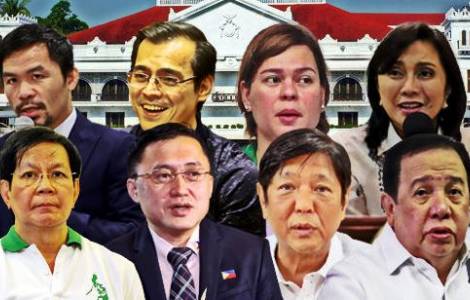 Manila (Agenzia Fides) - Filipino citizens "should vote according to their conscience in the general elections in May"; citizens have a "tendency to support the probable winner, the candidate considered stronger, rather than voting according to their conscience: this tendency is extremely worrying". This is extremely disturbing", said Bishop Pablo Virgilio David, Bishop of Kalookan and President of the Catholic Bishops' Conference of the Philippines (CBCP), speaking a few days ago during the virtual forum organized by the "Brotherhood of Christian Businessmen and Professionals". As Fides has learned, the Bishop said: "If we just look at the polls, it should already be clear who will emerge victorious in the next presidential and vice-presidential elections", said Msgr. David. According to a recent poll carried out in December by the "Pulse Asia" institute, Ferdinand Marcos Jr - son of the dictator - receives 53% of the preferences of those questioned, followed by the current vice-president Leni Robredo, with 20% of the vote. While Filipinos tend to vote for candidates "based on the likely winner, we have failed in terms of forming a moral conscience among Catholics", the Prelate said.
Noting the proliferation of misinformation and false propaganda, especially through social media, "there is an urgent need for Filipino citizens to stand up for truth, honesty and transparency". "One of the crucial moral issues in the upcoming elections in May 2022, he continued, will relate to the moral imperative of respecting the truth. The moral obligation of every Christian is to defend the truth. It has become particularly difficult in this age of misinformation", the Bishops' Conference president said. Social media, he explained, has been used to spread lies "and news without verification", unlike mainstream media, which employs professional journalists to verify information and validate reported facts. It is notorious, he recalled, the use of trolls and fake accounts on social media, used in favor of a candidate against his political opponents. "Slander spreads falsehoods about a candidate. This includes the use of social media trolls. Their job is to spread lies until they are accepted as truths", he said, explaining the perverse mechanisms of propaganda. Msgr. David then took up another cultural challenge, that of fatalism: "As we prepare to choose a new group of leaders for our country, the greatest challenge is to free our people from fatalism, from resignation to a politics of patronage. How do we convince the Filipinos that they are not powerless, that we can make things better if they want? We must avoid the resignation that makes us a paralyzed nation. We must free ourselves from the tendency to belittle ourselves and to think that we are subject to a fate already sealed", Msgr. David said.
The Electoral Commission is in the process of publishing the final list of official candidates, including candidates for President, Vice President, 12 Senators and 308 House representatives. It is also planned to vote for 81 governors and vice-governors, 780 seats in provincial councils, 1,634 mayors and deputy mayors of municipalities, and 13,546 seats in local councils. According to the 1987 Philippine Constitution, general elections are held every six years on the second Monday of May. (SD-PA) (Agenzia Fides, 22/1/2022)