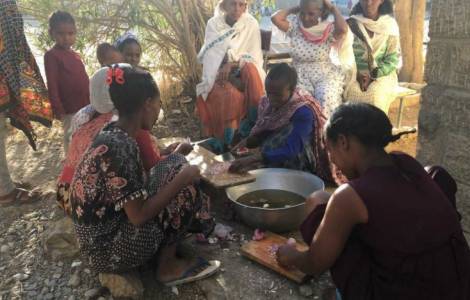 Adigrat (Agenzia Fides) - Due to the ongoing fighting in the Ethiopian region of Tigray, the transport of humanitarian aid has been suspended since 14 December. Although there are more than 800,000 people who should be assisted every week, between January 6 and 12, about 10,500 people received food assistance. This is the lowest level of food assistance since operations expanded in March last year - confirms the United Nations Office for Humanitarian Affairs (OCHA). Partners also reported that remaining food stocks can only assist 28,000 people.
The ongoing fighting in Abala, in the Ethiopian region of Afar, meant that the Semera-Abala-Mekelle corridor was closed and consequently the United Nations was forced, together with other NGOs, to reduce, postpone or cancel the interventions of assistance of all kinds in the region.
According to the United Nations body, the humanitarian response has been intensified in the accessible areas of Amhara and Afar. In Amhara, more than 578,000 people received food assistance in the past week, and more than 40,000 received shelter and non-food items. Internally displaced persons continue to return to their places of origin in Amhara, with hundreds of thousands of people estimated to have returned. Assessments of returns and the humanitarian situation in areas of return is ongoing. In Afar, more than 47,000 people received food assistance in the past week. And 30 mobile health and nutrition teams continue to essential nutrition services in remote and conflict-affected communities.
In recent days, the International Committee of the Red Cross has stated that some doctors from Tigray are forced to use salt to disinfect wounds, distribute expired drugs and re-use disposable items such as drains and gloves.
A measles vaccination campaign launched in the first week of January continues reaching more than 145,000 children to date, out of nearly 800,000 in need. However, health partners report that the campaign is facing serious challenges, including a lack of fuel and cash, limited cold chain capacity, and shortages of health care workers. (AP) (Agenzia Fides, 21/1/2022)