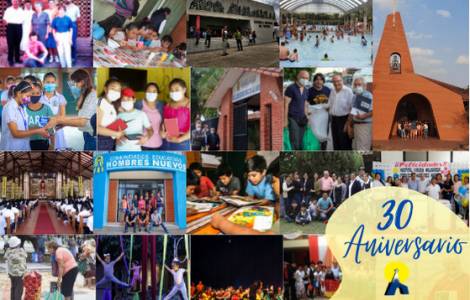 Santa Cruz (Agenzia Fides) – Msgr. Nicolás Castellanos Franco, Bishop Emeritus of Palencia (Spain), arrived as a missionary in Bolivia in January 1992, after having resigned as Ordinary of Palencia, precisely in the Plan Tres Mil district, in Santa Cruz de the Sierra, where 60% of the population was poor and 40% lived in poverty. Faced with this reality, he founded the "New Men" ecclesial fraternity, ("Hombres Nuevos") made up of priests, religious, lay people and volunteers, and thus began the "New Men Project".
Carrying out important work in the field of education and development, this project quickly became an institution with enormous potential to respond to the many needs of society. The project thus turns 30 years old, as the Bolivian Episcopal Conference recalls in a note sent to Agenzia Fides, with great results in terms of education and culture: 100 schools, homes in the highlands so that the students do not have to walk 4/6 hours to go to school; 85 multifunctional fields; Faculty of Theater, with the Catholic University of Bolivia; New Men School and Orchestra; Sports schools; Rhythmic gymnastics ... The Project also promoted comprehensive education and training of professionals through university scholarships, from which more than 5,000 graduates and higher technicians have been able to benefit. Support was also ensured for micro-enterprises. Evangelization is achieved through the integral promotion of the whole man and woman, through groups for deepening the faith, groups of young people, children, human rights, Caritas, ecclesial communities. In 1992, malnutrition caused many children to die. The "Palencia" children's center, which began operating one month after the foundation of "New Men", has saved the lives of more than 5,000 Bolivian children. A huge amount of work was also carried out in the field of social housing, with the collaboration of more than 5,000 volunteers and the generous contribution of institutions, companies and individuals. This roadmap of New Men, even more extensive, had and has a double objective: Raise the self-esteem of Bolivians, through the instrument of education, raise their dignity to the point of becoming the protagonist of their own history, to be a submissive and passive subject, giving life instead to a free, responsible, supportive and happy citizen. (SL) (Agenzia Fides, 20/1/2022)