ASIA/PHILIPPINES - A Camillian heart always beats when there is suffering: aid continues for the population hit by Odette 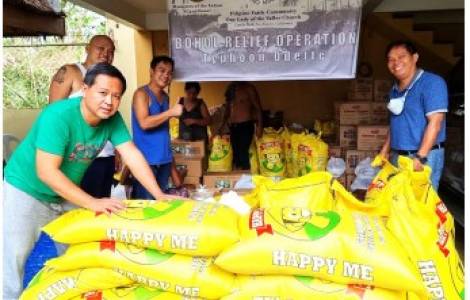 Bohol (Agenzia Fides) - Typhoon Rai, known in the Philippines as Typhoon Odette, which hit the country on December 16, 2021, devastated the islands and coastal communities of the eastern Philippines, flooding towns and cities across the country (see Fides, 20/12/2021). "Millions of people already hit hard by the social and economic impact of COVID-19 have found themselves facing the super storm - reads a note sent to Agenzia Fides by Camillian Disaster Service International (CADIS). Due to the difficulty of access to the affected communities, the lack of electricity, internet and communication signals, the local authorities and the relevant humanitarian agencies were unable to make an immediate assessment of the extent of the damage. However, almost a month later, together with the two local partners, the Society of ex-Camillian Seminarians Inc. (SeCSI Bohol) and the Negros ExCamillian CTF Unit Team, Cadis is carrying out rescue operations in the provinces of Bohol and Negros Occidental, one of the most affected provinces in the Visayas region". According to what was declared to Fides, most of the survivors were isolated and without any shelter.
"The super typhoon caused extensive damage to lives, homes, public infrastructure and electrical and telecommunication services. It has affected an estimated 7.3 million people across the country, with an estimated 2.4 million individuals in need of emergency food, health care, shelter and assistance".
Among the areas that CADIS continues to monitor are the island and coastal communities of Ubay, Calape and Tubigon (Bohol) and the coastal communities of the diocese of Kabankalan. Initially, the goal was to reach more than 5,000 families.
"The Bohol team distributed relief packages to 680 families in the municipalities of Ubay (communities of Tapon and Calangaman), Calape (islands of Pangangan and Matabao) and Tubigon. Each family pack contained 3 kilos of rice, 3 cans of sardines, 7 packs of noodles and hygiene kits, enough for at least a week. Although insignificant compared to their current needs, it will help affected families begin to focus on recovering damaged properties and livelihoods". "In Ubay, CTF Operation Kabalaka rushed to the aid of fishermen who spent the Christmas holidays homeless and without provisions. 230 families have been reached, but the aim is to reach another 1,350 in the barangays of Tapon and Calangaman".
The CTF Negros team is working in one of the most affected municipalities of Cauayan Negros Occidental, in particular in the Elihan barangay. The group was formed precisely to face Odette. "The disaster brought them together to plan a coordinated and organized response. Among the members of the team there is an Italian, a former Camillian, who has lived on the island of Negros for more than a decade. As the saying goes, a fruit can be recognized by its tree and its roots. A Camillian heart always beats when there is suffering.
"Odette demonstrates how climate change can be highly destructive, albeit predictable. The geographic region of the Philippines is naturally predisposed to receive several typhoons throughout the year. What has drastically changed in recent years is the intensity with which these phenomena affect different areas of the globe. (AP) (Agenzia Fides, 20/1/2022)