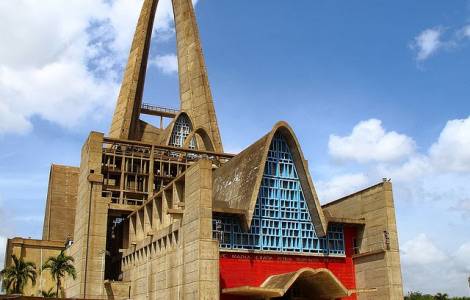 2022-02-26
The Bishops on the occasion of Independence Day: "Let the truth come out for the good of the nation"

2022-01-20
The Bishops: "St. Joseph supports us in our daily struggles, no one like him knew how to go through difficult times"

2022-01-19
The needs of the Dominican people and the world at the feet of the Mother of Altagracia; national blessing by air, sea and land

2021-10-11
"Walking together, not only on the level of faith, but also on a human level": National pastoral meeting

Higuei (Agenzia Fides) - Within the framework of the celebrations of the Jubilee Year of Altagracia, proclaimed by the Dominican Episcopal Conference - from August 15, 2021 to August 15, 2022 -, to commemorate the Centenary of the Canonical Coronation of the Image of the Virgin of Altagracia , on January 21, Solemnity of the Queen and Protector of the country, the Dominican people will gather as every year in the Basilica dedicated to Her, in the place where it is believed that she appeared (see Fides, 11/10/2021).
The Basilica is located in the center of the city of Higuei, and is the most important Marian complex in the country, as well as the most frequented by Dominicans and tourists, who come in large numbers on pilgrimage, especially for the feast. The Patroness of the Dominican Republic has received the title of "Altagracia" because no one can bestow more graces on her children than her, the Mother of God. The image of Our Lady of Altagracia was crowned by Pope Pius XI and Pope John Paul II: the first coronation took place on August 15, 1922, the second on October 12, 1992, during the second visit of Saint John Paul II to the country. "We invite the different parishes of the Diocese of Our Lady of Altagracia and all the Christian people to participate with the joy that characterizes the believer who is a pilgrim through this world, confident and hopeful in the promises of our God, our Heavenly Father", writes the Bishop of the Diocese of Our Lady of Altagracia, Monsignor Jesus Castro Marte, in a letter to the faithful, sent to Fides, which is also signed by Fr. Evaristo Areché Freijomil, Rector of the Basilica. "Aware of the health situation in the country, due to the wave of infections caused by Covid-19 and its variants", continues the Bishop, "the pertinent measures have been taken to guarantee physical distance and thus avoid crowds; in addition to scrupulously following the health protocols, established by the Ministry of Public Health and Social Assistance, in order to provide pilgrims a safe environment". After recalling the health regulations that must be observed, the Bishop asks for the collaboration of all those who will participate in the celebrations, "because as Christians we must be exemplary citizens" and concludes: "We place the needs of the people at the feet of our Mother of Altagracia, so that she may continue to intercede and accompany us in these difficult moments that our country and the world are experiencing". On the same day, January 21, a "National Blessing by air, sea and land" will be imparted, as announced by Monsignor José Grullón, Bishop Emeritus of San Juan de la Maguana and President of the National Centenary Commission.
Some Bishops will gather at La Isabela International Airport (El Higüero), from where the priests will depart in airplanes, ships and army vehicles, carrying the Blessed Sacrament and the image of the Virgin of Altagracia to bless the Dominican people for an hour. During the national blessing, Dominicans are invited to wave a white handkerchief in gratitude to the Virgin who has protected them for more than 500 years. (SL) (Agenzia Fides, 19/1/2022)

ASIA/CHINA - The diocesan Seminary of Beijing opens the Marian Month: "Like Mary, we bring grace and joy freely received to all"