AMERICA/BRAZIL - "Solidarity is fundamental to follow Jesus Christ who stood alongside the most deprived": floods hit Marabà 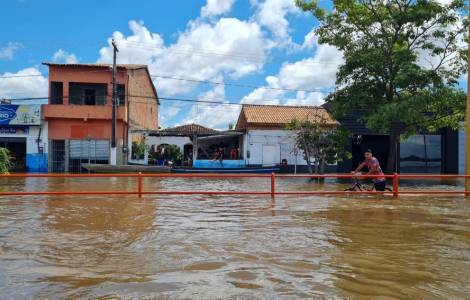 2022-05-18
"Sister Churches": collection of Pentecost for the mission in Mozambique

2022-05-06
Conscious choices for the good of the Amazon and the community: Repam-Brazil campaign ahead of the elections

2022-04-30
Bishops call for urgent change of course: "The situation is very serious"

Marabà (Agenzia Fides) - The city of Marabá, in the state of Pará, is going through difficult times due to the flooding of the Itacaiúnas and Tocantins rivers. Local authorities and organizations (government, civil protection, army...), as well as the Church, strive to build shelters, transfer homeless people, provide food, mattresses, clothing and other aid to those affected by the floods. The Diocese of Marabá, with its communities, priests, religious and pastoral workers, is caring for the families affected by the floods, collecting and providing aid to those who need it most. "We are united with the people who suffer and with all the people, the realities, the authorities who help the people who suffer. Solidarity is fundamental to following Jesus Christ who stood at the side of the most deprived people. Love for God, for others as well as for oneself, is the word of Jesus to be followed and lived", said the Bishop of Marabá, Mgr. Vital Corbellini, recalling that donations are collected by the parish secretariats.
On Sunday, January 16, after the Angelus prayer, Pope Francis recalled the recent floods that hit the country recently, with these words: "I express my nearness to the people hit by strong rain and flooding in various regions of Brazil during these past weeks. I am especially praying for the victims and their families, and for those who have lost their homes. May God sustain the efforts of those who are providing relief". The torrential rains that have been raging since December in the northeastern region of Brazil, affecting in particular the states of Bahia, Minas Gerais, Espirito Santo and Goias, have caused floods, landslides with the consequent loss of homes, schools and workplaces (see Fides 29/12/2021; 8/1/2022). (SL) (Agenzia Fides, 18/1/2022)

AMERICA/BRAZIL - Petropolis launches urgent call for help after the storm