AFRICA/ETHIOPIA - "Food and medicine for the population! Humanitarian corridors must be opened": Tigray in the grip of heinous crimes 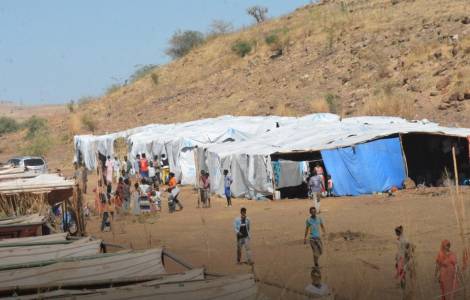 Adigrat (Agenzia Fides) - "Unfortunately it is all true, come and see for yourselves", a member of the local Church of Ethiopian Tigray tells Agenzia Fides, who for security reasons requests anonymity. The tragedy he refers to is the one that has been taking place across Tigray for almost two years. "There are massacres of innocent people massacred only because of their ethnicity, and multitudes who are literally dying of hunger: humanitarian corridors must be opened immediately to help those who are now exhausted". Since the start of the war in November 2020, Tigray has been cut off from the rest of the world. Humanitarian aid comes with a dropper while telephone and Internet communications are completely cut off. Therefore, it is difficult to obtain information about what is happening in the region. The truth is that humanitarian aid cannot reach the population, which is deprived of everything, especially the most needy, the sick, the elderly, women and children. There is a shortage of everything that can guarantee a minimum of subsistence: food, water, medicine. More than 90% of the hospitals have been destroyed, the schools have been closed for two years and the banks have no money.
"Those in power don't want people to talk, to tell about the atrocities they are suffering. There is a climate of terror, further fueled in recent months by the deadly raids of combat drones. We have never seen anything like it in sub-Saharan Africa. And in the international community, no one is taking the right initiatives to put an end to all this. All geopolitical actors only look at what happens here from the perspective of their own strategic interests".
Prime Minister Abiy initially received the support of the people. Then everything changed. "Certain actions seem to respond only to the ruthless calculations of those who are willing to play all the roles and even betray their supposed 'allies' in order to maintain power at all costs. Now it is said that their power base is represented by the Amara ethnic group: but in reality, no one trusts anyone anymore and the scenario is becoming one of war against everyone. Everywhere the economy of the country has been destroyed. There are no more investments. Everything has been destroyed. Destroyed factories, historical places, houses, churches, missions everything destroyed. No one has said anything so far. Only Pope Francis has intervened several times asking people to pray for Ethiopia. But now we have really reached a point where someone has to say enough is enough. No more deaths, no more hunger, no more closure of humanitarian corridors. The lack of food has become the weapon with which to make people die and not feed them. Generations of young people have been completely destroyed. We are talking about 6/7 million people who suffer from this unprecedented situation of violence". "We have no news of our loved ones, of our friends. Some are in Addis Ababa, in prison just for being Tigrinya. People are dying, they have no work, they have nothing to eat. And every day that passes without help, thousands of lives die", concludes the witness.
The tragic situation in Ethiopia is reflected in the worried words of an authorized source of the Church. "Ethiopia" - he reports to Fides - "is in a situation of enormous difficulty. It seems that everything is pushing us towards the abyss. Terror grows; mistrust among groups increases. Let us pray to the Lord to put an end to this spiral of violence: then we can find a way to heal the wounds: but now is especially the time to save the lives of all the innocents exposed to the risk of dying in a torn country; where until recently everything seemed to promise a better future". In recent days, Dr. Tedros Adhanom, Director General of the World Health Organization, has declared that the blockade that prevents medicines and other vital supplies from reaching Ethiopian Tigray is "an insult to our humanity". The situation is desperate. I come from that region, said Tedros Adhanom. Seven million people without food, medicine, electricity, telecommunications for more than a year. WHO has been authorized to send medicines and drugs to other regions of Ethiopia, but not to Tigray since last July. According to reports from aid workers, more than a hundred trucks of aid per day are needed to help the population in Tigray. (AP) (Agenzia Fides, 18/1/2022)