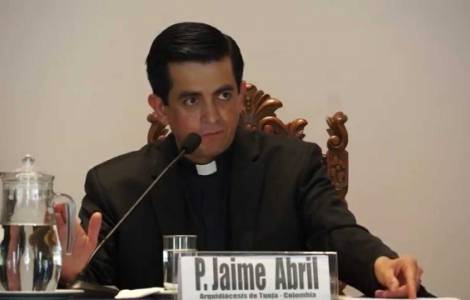 2022-05-03
The Bishops for the Day of Reconciliation: "let us continue the commitment to be artisans of forgiveness, reconciliation and peace"

2022-04-20
Violence in Arauca even at Easter: four people killed, including two children

2022-04-01
Catholic Church and United Nations in Arauca: dialogue and processes to support victims are needed

2022-03-25
Attacks on religious freedom and freedom of worship 'deplorable and unacceptable', bishops call for dialogue

Arauca (Agenzia Fides) - "We wish to reaffirm once again our closeness and our solidarity with all the most affected population, as well as inviting them not to be discouraged and, on the contrary, to grow in the hope that everything can be better in the Lord": is the exhortation of Monsignor Jaime Cristóbal Abril González, Bishop of Arauca, in his message in the face of the complex situation of the Colombian Department, which is located in the north-eastern part of the country, on the border with Venezuela. In his statement, sent to Fides, the Bishop notes the resumption of the armed conflict between rebel groups, which has caused victims and suffering especially among the civilian population, which has led to the aggravation of the humanitarian and social crisis, with selective assassinations, especially of young people, forced displacement of entire families, especially in rural areas, threats to leaders, attacks with explosives, burning of vehicles, among others. Recalling the words of Pope Francis at the prayer meeting for national reconciliation in Villavicencio in 2017, the Bishop underlines that "in situations like the one we are experiencing, the first to be sacrificed is the truth". Announcements, videos, statements whose authenticity is not verified, spread through social media, sow uncertainty, confusion and fear. "We believe it is fundamental to reiterate that life is sacred, it is a precious gift received from God", underlines Monsignor Abril González, who continues: "the dignity of each person must be respected, the population must be left out of clashes and hostilities, the application of international humanitarian law is required". The Bishop of Arauca addressed the direct protagonists of the conflict, inviting them to "move from mutual recrimination ... to adequate reflection, to a serene analysis of events, to face the truth and clarify the facts, to stop the growing whirlwind of murders, violent acts and threats, to put the good of the civilian population they claim to represent and defend first". He asks the civil authorities to "protect the life and integrity of the most affected population", as well as to implement emergency and humanitarian aid plans. The international community is invited to continue to offer its accompaniment and support to the civilian population and organizational structures. Members of structures, social leaders and all people in general, are asked to be prudent, avoiding imprudent comments, accusations or complaints that could put anyone's life at risk. The Bishop concludes: "As the Catholic Church of Arauca, faithful to our mission, we renew our commitment to peace, justice and the good of all; we express our willingness to contribute, to overcome the situation we are experiencing. We continue to urge everyone not to stop praying, invoking above all the gift of peace". According to the office of the Ombudsman, at least 145 social and human rights defenders, were murdered in Colombia in 2021. Among them 32 are indigenous representatives, 16 peasant leaders and 7 trade unionists.
Since the signing of the Peace Agreement with the guerrillas of the Revolutionary Armed Forces of Colombia (FARC) in 2016, the killings against social leaders have never stopped. FARC dissidents, fighters from the National Liberation Army (ELN), drug traffickers and paramilitary groups disputing the territory are accused of the violence that continues in the country. Colombia is the world's largest producer of cocaine. (SL) (Agenzia Fides, 18/1/2022)

AMERICA/COLOMBIA - Bishop of Buenaventura receives death threats: “Today he is the victim”