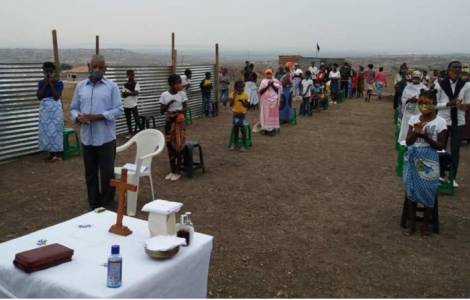 2022-08-23
President of CEAST: "May tomorrow's vote take place in a spirit of peace, reconciliation, unity and fraternity"

2022-02-03
"Angolan democracy will be consolidated with this year's vote", hope the Bishops

Luanda (Agenzia Fides) - "The meaning of life is to love others at all ages and in every place. We Christians proclaim and testify first of all that someone else gives our life meaning because he loves us: he loves everyone and always", writes Father Angelo Besenzoni, missionary in the parish “Sagrada Familia” in Musseque-Kicoca, a suburb of the capital of Angola. "There is not much here in 'musseque', which in Kimbundo means 'red earth' and comes from the informal settlements that have sprung up on the outskirts of Luanda. There is a lack of work, drinking water and hospitals, but there is never a lack of certainty that God's love gives meaning to everything".
"My parish is located right in the so-called 'musseque'" says the missionary of the Society for African Missions (SMA) who has shared the hard life in the suburbs with his people for 13 years.
"There is no work, and those who want to work have to go to Luanda. There is electricity almost everywhere, but there is still no water, which is called "precious liquid" here. Some can buy it in tankers, and those who cannot buy in tubs and buckets, pay a lot of money for it.
Regarding education, despite the fact that about half of the population is under twenty, young people who wish to study are forced to emigrate to the city given the precariousness of elementary schools and the total absence of secondary schools.
"First the oil crisis and then the Covid crisis exacerbated all of these problems", explains Father Angelo. "Many people have lost their jobs, food prices have tripled, the sick are poorly cared for in the hospitals, absorbed by coronavirus concerns. The heat, or the antimalarials we have in our bodies, have so far protected us from Covid. The vaccines have arrived in the cities, but have not yet reached Musseque. People have extraordinary resilience and adaptability, and every month they get used to living on less and less food and money".
The Italian Father Besenzoni has been in Kikoka for four years, first as an assistant to Father Ceferino Cainelli (SMA) in the formation of young religious candidates who want to become SMA seminarians, and later as head of the new parish consecrated to the Holy Family.
"One way to love others is to keep our door open and listen to those who come to us with their problems - concludes the missionary -, or to visit the elderly and the sick, or to give a hand to families in need to send children to school and put something on the table". (AB/AP) (Agenzia Fides, 12/1/2022)