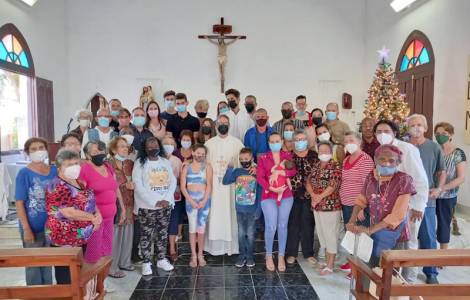 2021-05-04
The religious of Camaguey denounce: "people are tired and stressed, they cannot take it any longer, it is an unsustainable situation"

Ciego de Ávila (Agenzia Fides) - To celebrate the 25th anniversary of the diocese of Ciego de Ávila, erected on February 2, 1996, it was decided that the various pastoral areas together with the communities, celebrate jubilees throughout these months.
As reported by the diocese communication office, the diocesan meetings, which should have started with the opening of the Jubilee Year, could not begin until December 2021, due to the continuous waves of Covid-19 that seriously affected Ciego de Ávila, forcing the suspension of all kinds of public events, also at the ecclesial level.
The first parish to host the Jubilee celebration was that of St. Joseph in Jatibonico. The community, together with the Pastoral Care of Educators, celebrated the diocesan anniversary on Saturday December 18, 2021. Then the Pastoral Care of the Family and the Penitentiary, together with the community of Majagua, celebrated it on the afternoon of Sunday, December 26, the day of the Holy Family.
On Sunday, January 9, 2022, the Pastoral Care of the Laity celebrated the jubilee together with the community of Pina. These celebrations, again as the diocese informs, will continue to take place in the different communities, to encourage the joint work of the pastoral ministries with the parishes, in order to carry out what the Psalm 126 that was chosen as the motto for this year says: "The Lord has been great with us and we are happy".
In the Jubilee meetings, those responsible for the Pastorals involved shared their experiences about the work they do and exhorted the participants. Monsignor Juan Gabriel Díaz Ruiz, Bishop of Ciego de Ávila, accompanied these celebrations and presided over the Eucharist. The history of the diocese has been remembered in images, thanks to the traveling exhibition "25th anniversary" by the Avilanian photographer Cirilo Ruíz, exhibited in these temples to accompany the diocesan jubilees.
As part of the Jubilee celebrations, on December 14 the new Pastoral Center of the diocese was inaugurated, which houses, in addition to the library and the diocese chapel, the OSA Father José López Piteira Training Center, the Office of Communication, a press office, meeting rooms and the pastoral care office.
On the morning of Tuesday 14, the Pastoral Agents held their monthly meeting in the Diocesan House to take stock of ecclesial life in recent months and outline the challenges for the new year. In the afternoon, the Pastoral Center was inaugurated, a place destined to enrich the pastoral life in Ciego de Ávila and the religious and human formation of the people of Avila. As part of the opening ceremony of the Center, a commemorative issue of Imago magazine was presented, dedicated mainly to the 25th anniversary of the diocese.
The diocese of Ciego de Ávila encompasses the entire province of the same name and the municipality of Jatibonico, and is a suffragan of the Archdiocese of Camagüey. It has a population of 466,400 inhabitants, of whom 191,600 are Catholic. There are 7 parishes, 6 diocesan priests and 7 religious. In addition, there are 3 permanent deacons, 7 religious non-priests and 19 religious women. (SL) (Agenzia Fides, 11/1/2022)