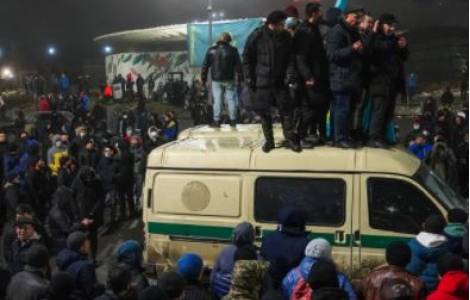 Almaty (Agenzia Fides) - This is not a simple street protest against the expensive bills: the revolt that has been inflaming Kazakhstan since January 5 is a real political crisis that affects above all the new upper middle class and which could lead to a nationalist and anti-Western campaign. Father Edoardo Canetta, missionary in Kazakhstan for twenty years, five of them as Vicar General of Central Asia, now professor at the Ambrosian Academy in Milan, explains to Fides: "Until last year - he notes - fuel in Kazakhstan cost 40 cents a liter, an unthinkable price in Italy. Today those prices have been doubled and, at the same time, inflation has reached very high peaks. All this has led the middle class to protest violently: it is these citizens who feel most affected, given that the poor do not own cars. People do not understand why a country that 'floats' on gas and oil must pay so much for oil and gas".
This phenomenon, explains Don Canetta, is due to the multi-year agreements signed between Kazakhstan and the big oil and energy companies immediately after the collapse of the USSR: "When the Soviet Union fell, Kazakhstan, like all the countries of area, was in a state of absolute poverty. It therefore agreed to stipulate contracts, still valid today and for several years, according to which only a very small percentage of the profits from the extractions go to the country. Large foreign companies have enriched themselves from this activity carried out on Kazakh territory which, on the other hand, have supported investments and brought technology, research and human resources. The Kazakh people, however, do not understand the reason for these agreements and continue to claim ownership of the deposits".
The uprising began in the early hours of January 5 and affected several Kazakh cities, but its epicenter was Almaty, the financial capital of Kazakhstan. Dozens of protesters were injured or killed in the clashes, 18 police officers lost their lives and more than 2,000 people were arrested. Rioters occupied and ransacked television stations and airports, leading to the suspension of air links.
Since the early hours of the revolt, the country has been isolated: telephone connections are precarious and the Internet connection is almost completely absent, as Fr Guido Trezzani,
national director of Caritas, resident in Talgar, a town in a few kilometers from Almaty told Fides: "For two days - observes the missionary - a state of emergency has been declared due to the unrest that has broken out in various parts of the country. The first consequence is the blocking of the internet and all related services. Sometimes it is possible to use e-mail, but other services such as Skype and social media have been blocked".
As a Caritas Kazakhstan operator reported to Fides, for two days the staff of the organization, based in Almaty, have not been able to reach the office: "We are about a kilometer and a half from the government building and we hear gunshots, but we do not really know what it is. We are all fine, but I think the safest thing right now is to stay at home", he informs.
Meanwhile, as troops sent by Russia in support of the government have arrived in the country, the Kazakh Foreign Ministry has issued a note in which it is emphasized that "the rights and interests of all the representatives of our multi-ethnic and multi-religious people, the safety of foreign citizens in the country, including diplomatic representatives and journalists "will continue to be guaranteed". (LF) (Agenzia Fides, 7/1/2022)